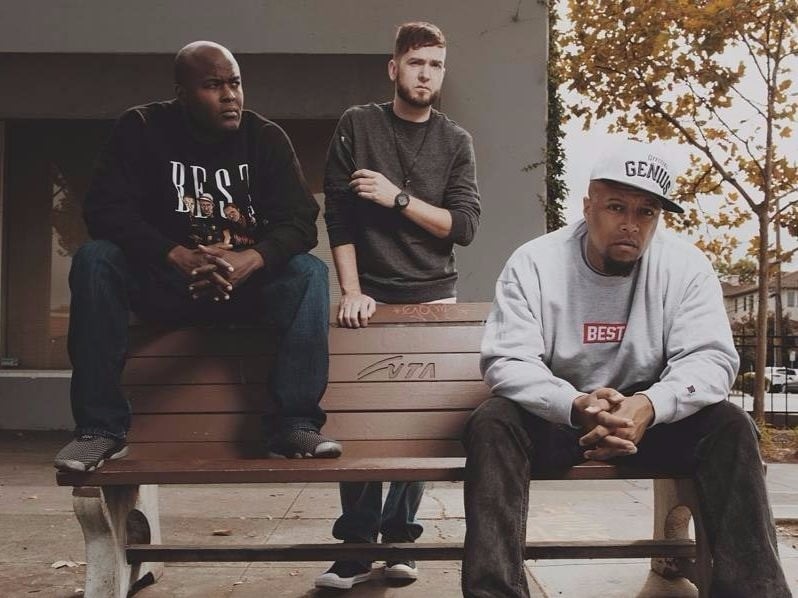 CunninLynguists Discuss Their Music's Evolution & Why Donald Trump Is "Disposable"

CunninLynguists — Deacon The Villain, Kno and Natti — have been releasing critically acclaimed material for 15 years now. Natti’s addition to the group for 2006’s A Piece Of Strange only improved an already solid foundation and the trio’s been rolling with that lineup ever since.

After a six-year span where the southern stalwarts focused on side projects, CunninLynguists finally returned with their sixth album, Roze Azura Njano, in October. The concept record marked a new chapter for the group. It followed a surprise series of EPs the trio released throughout 2017 before unveiling the full-length album.

HipHopDX caught up with the crew to discuss the new project and look back at the Dirty Acres LP, which recently celebrated its 10th anniversary. That particular album’s layout memorably featured the group burying a Klansman, something more relevant than ever.

In this extensive conversation (the transcription only scratches the surface), CunninLynguists detailed Donald Trump’s effect on their latest work and how the group’s sound has evolved over the years.

On Rolling Out Rose Azura Njano As A Series Of EPs

“I think we felt like maybe we spent our entire careers attending to an Outkast-style of album rollout or rollout where you basically disappear for an entire year then every two plus years, you drop a record, do some shows and then disappear again,” Kno said. “That’s kind of what’s necessary, I guess, to make a quality full-length, at least adhering to the quality that we like to adhere to. But we felt like maybe if we made the record in a sequential order and then released the songs, even if they weren’t completely like 100 percent done and still maybe tweaked them through the process, it would kind of keep the fans in the loop. Even if we don’t tell them what exactly is going on, they’d have music to listen to.

“I think it was moreso just, not a necessity, but we kind of — shout out to Tonedeff because he kind of did the same thing,” he continued. “But as is the case, a lot of times with great ideas, sometimes if you’re one of the first people to really try to pull it off, it has kinks. So, we kind of saw what Tonedeff did right and what he did wrong and talked to him about it and basically tried a similar approach but tried some different things so that we didn’t fall into the same pitfalls.”

“It was like a different type of inspiration on top of that,” Deacon added. “In today’s age, if you can be as transparent as possible, it was like the fact that we could write a rap on Monday and it would come out two weeks later. We have never really been on that wave. We come from a older school, so to speak, so it allowed us to do that. It was way less filtered because we didn’t have time to filter. We would drop the song then Kno would immediately go into mix mode, give it to the master guy. By the time it’s back, the artwork was ready and we just drop. So it’s a way rawer, uncut version of us than you normally would’ve got.”

“I’m sure there’s certain things that probably wouldn’t be made,” Kno said. “But to be honest with you, the more political stuff on that record was written before he even won office, so the earlier the stuff in the Rose EP — the first three songs of the record — I feel are a little more political than the rest of the record because that was why we did it like that. ‘Riot!’ was written, or at least a good portion of it was written, before the end of last year, so we finished the songs and put them out in like February, March.

“But conceptually, ‘Riot!’ already existed in summer of 2016,” he continued. “I mean, obviously, because it’s not like there hasn’t been things going on. And we made it a very specific point to not even say his name on the record. I feel like he is a disposable human and our music isn’t disposable. I don’t like mentioning stuff that’s disposable. He capitalized on a moment because he was the sociopath with the most money and the most push behind it. I mean, that’s it. That’s all he gets credit for is being a piece of shit.”

“I think Trump did [influence the direction],” Deacon noted. “Even though we wrote that before he was elected president, he was part of a movement that was a backlash to Obama being president. So, it’s more like it’d be better to say if Obama wasn’t elected president, we wouldn’t have made these record [laughs]. Trump was a whitelash to Obama as president and the whitelash required us to make the album in a way.”

On Dirty Acres & Its 10th Anniversary

“Dirty Acres was my first time in CunninLynguists being able to rap in the first person about myself,” Natti said. “A Piece Of Strange was more theatrical and putting yourself in a character’s shoes and taking painting a picture for someone. Dirty Acres was more like alright, just do you. So, that was the fun part of doing Dirty Acres. I felt like fans will finally get to know what I think about things. I took the mystery out of it. I love doing both of those projects, but Dirty Acres was just the one … it felt more Kentucky to me at the time that we did it. It was more southern, should I say, than maybe A Piece Of Strange was. It didn’t shy away from that. That album will always hold a special place to me.”

“In the beginning on our first two albums, SouthernUnderground and Will Rap For Food, we didn’t consciously say to ourselves we wanna show our southern roots back then,” Deacon recalled. “So if anything, on A Piece Of Strange and Dirty Acres, we were trying to submit to our southernness more but not any particular sound from the south. Just the fact that we’re fuckin’ southern. On the first two albums, people didn’t know where we were from and we didn’t like that. People would guess, “Are they from New York? Are they from West Coast?’ Naw nigga, we from the south!”

On Kno’s Return To Rapping For Dirty Acres

“I think it probably freed us a little bit in how we approach things, so I think we feel a little less pressure to let the shit simmer for two years,” Kno explained. “Going forward, whatever new music we put out I think will be a little looser.”

“It creates a new approach,” Natti said. “Anything goes. Ain’t no rules. The only rule is we’re probably not gonna go back to the formal way. Let’s put it like that.”

“We might drop a song a day for 20 days straight or just drop a triple disc out of nowhere,” Kno added. “I mean, who knows? We definitely feel a lot looser and this record has proven that we can kind of do it on the fly, and make our process a little more see-through and still deliver the quality that we’re used to making.”