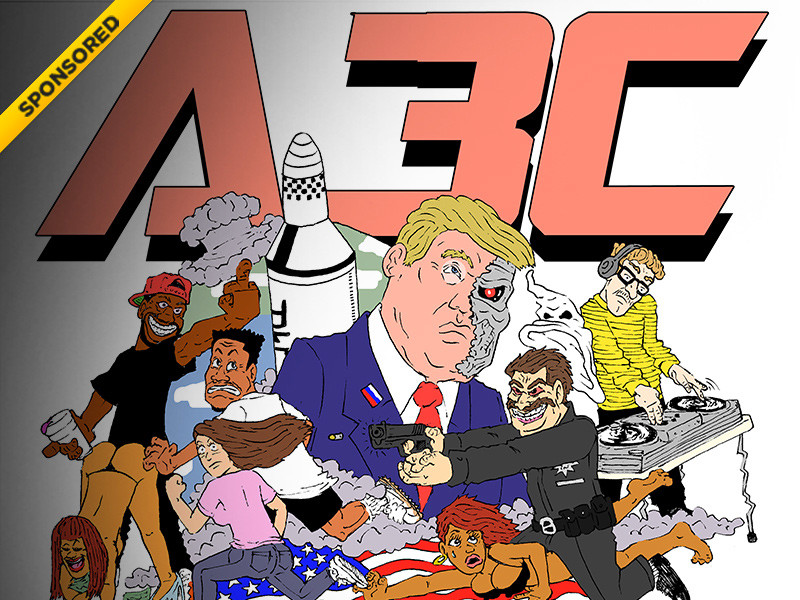 “Compiling these tracks was truly a nationwide, team effort this year and we want to thank A3C, all of the artists, A&Rs, scouts, managers, producers, lawyers and media partners that have helped us make what we believe is our best compilation of young talent to date,” Executive Producer‎ Chuck Wilson said in a statement. “Armed with the massive power of new streaming technology, a new generation has taken over hip-hop and made it their own and we believe that this is a beautiful thing. We are particularly proud that this year’s compilation includes so many women. Enjoy the music, share the music, playlist the music and please support these artists.”

Stream A3C Volume 7 on SoundCloud below.

02.  Yutes – “Trap Don Dadas” (prod. prodbykendox)
Kingston, Jamaica
A talented hip-hop duo out of Kingston, Jamiaca, Yutes is a duo comprised of brothers ChrisNewImage and Santris. Looking to capitalize on their innate abilities, the brothers have recently move to the US to convert their music dreams into a reality.

04.  Yung Booke – “Like Woah” (prod. Boxhead)
Atlanta, GA
A musical stalwart, Yung Booke been making the rounds on the underground hip-hop circuit. While developing his sound and climbing the ladder, the Atlanta-based emcee has emerged as part of Hustle Gang, and collaborated with legendary artists, like T.I., Young Thug, and Future.

06.  Lucki – “Play” (prod. Forza)
Chicago, IL
A student of the game and a product of his environment, Lucki delivers an enticing sound predicated on a blending of traditional Chicago drill music with soulful accents.

08.  BigBabyGucci – “I Ain’t Never Comin Down” (prod. Joe Dirt)
Nashville, TN
Nashville’s BigBabyGucci delivers a distinct aesthetic that hinges upon his woozy bars and sonics. Putting on for the south, BigBabyGucci has garnered an impressive following that bodes well for his future.

10.  Kodie Shane – “Bounce Back” (prod. Bradlea Roi)
Atlanta, GA
Kodie Shane, the 18 year-old who is breaking barriers for female artists in Atlanta. Kodie, who is a frequent collaborator and an official member of Lil Yachty’s Sailing Team, has made waves this year with her debut EP Zero Gravity which was followed by Back From the Future EP in August. She has been profiled in The FADER’s GenF as well as Pitchfork’s Rising columns. Kodie performed at this year’s A3C Festival after coming off of 32 days on tour with Yachty and 23 dates with Lil Uzi Vert.

14.  Drako
Atlanta, GA
Finding great success with his hit single “Watch Me Do It,” which has been climbing the charts in Atlanta, Drako combines addicting lyrics with a quick flow to bolster his impressive rise.

15.  LeFemme Buo – “The One” (prod. Superpower)
Los Angeles, CA
Coming out of Los Angeles, newcomer, LeFemme Buo, offers an undeniable energy that is facilitated by an array of hip-hop production.

19.  Fune – “Dead To Me” (prod. Johnny Apollo)
Atlanta, GA
Fune is a rapper/songwriter out of Atlanta who uses a palpable intensity to garner fan attention.

21.  Mir Fontane – “Know Better” (feat. Kenif Muse) (prod. Kil Confirmed)
Camden, NJ
Mir Fontane is a diverse artist hailing from Camden, NJ. Having captured the attention of 300 Entertainment, Mir Fontane finds comfort as both a rapper and singer, and is equally adept in both areas.

23.  Lil West – “Heart4orever” (prod. Dmac)
Felton, DE
Coming out of Delaware, Lil West is keen on putting his state on the map. The 19-year-old rapper has attracted big name features, like 21 Savage and Rich The Kid, and offers a gritty, melodic vibe.

25.  FRANCEAUTHAGOD – “Okay” (prod. Tee $’teez)
Atlanta, GA
Atlanta’s FRANCEAUTHAGOD is putting numbers on the board and amassing a strong following off the strength of his rhythmic, raspy-coated flows.

27.  Jimmy Wopo – “Young Young N*gga” (prod. Pittsburgh Atomik)
Pittsburgh, PA
Pittsburgh’s Jimmy Wopo has enjoyed viral fame thanks to his hit track, “Elm Street.” The rapper, who is also one-half of Woponese along with Hardo, has made a name by issuing tales from his trap adolescence and has even collaborated with Wiz Khalifa.

28.  Nell – “We Ready” (feat. Rell) (prod. Tropdavinci)
Miami, FL
Nell is a Miami-based artist who is watching his star quickly rise thanks to his well-articulated and developed rhyme schemes.

29.  John-E – “Can’t Hang With Us” (prod. Tropdavinci)
Miami, FL
South Florida’s John-E is a melodic artist who is ready to show the music world what he’s made of.

30.  Ju$to – “Big Knots” (prod. Andrew Smars)
Oakland, CA
Oakland’s Ju$to might be from the Bay Area, but he harbors an Atlanta-influenced sound that connects with fans, and is increasing his cachet with impressive grind.

35.  Bags – “Good Dope” (prod. Platinum Sellers Beatz)
Decatur, GA
Coming out of Decatur, GA, Bags is an artist who fills his rhymes with tales of his Georgia adolescence.

37.  Trizz – “The Bucket” (prod. AC3Beats)
Inland Empire, CA
Trizz, hailing from Ingland Empire, CA, has been making his rounds on the underground hip-hop circuit for some time, and received admiration from famed publications from his solo work and AmeriKKa’s Most Blunted series alongside Chuuwee.

39.  Armed Rhymery – “I Won’t” (prod. Lucas Savo)
Lafayette, LA
The south is at it again with another hip-hop duo. Armed Rhymery is a group composed of 24-year- old Kween Mo and 26-year-old Edward X, who met in early 2010. Since their origin, Armed Rhymery has used their lyrical and sonic abilities to propel their careers forward.

42.  Spell Jordan – “Everything” (feat. Squidnice) (prod. Kid Ocean)
Washington, DC
21-year-old Washington D.C. transplant by way of Philadelphia, Spell Jordan, has built an impressive following in the DMV area, allowing him to collaborate with guys like Lil Xan, Matt Ox, and GYYPS. Staten Island rapper Squidnice started gaining serious buzz with his hit record, “Trap By My Lonely”. Featured in XXL’s “The Break”, the 20-year-old rapper has his eyes set on big goals, and is intent on making them a reality.

43.  Caleborate – “Sums Up” (prod. Jprotege)
Berkeley, CA
Caleborate, out of Berkley, CA, is a contemplative lyricist who uses typically laid-back instrumentals to help craft his tales.

47.  Meko Supreme – “Up” (prod. Johnny Juliano)
Saginaw, MI
Hailing from the midwest is rising rapper, Meko Supreme. The Michigan native is a melodic artist who is able to uniquely contour his voice to an eclectic production variety.

48.  Plsbug – “The Room” (prod. David Morse)
Frederick, MD
While Frederick, MD might not be a hotspot for hip-hop talent, Plsbug is keen on changing that. The Maryland artist spits primarily over trap production, and has worked with respected talent, including Yung Bans.