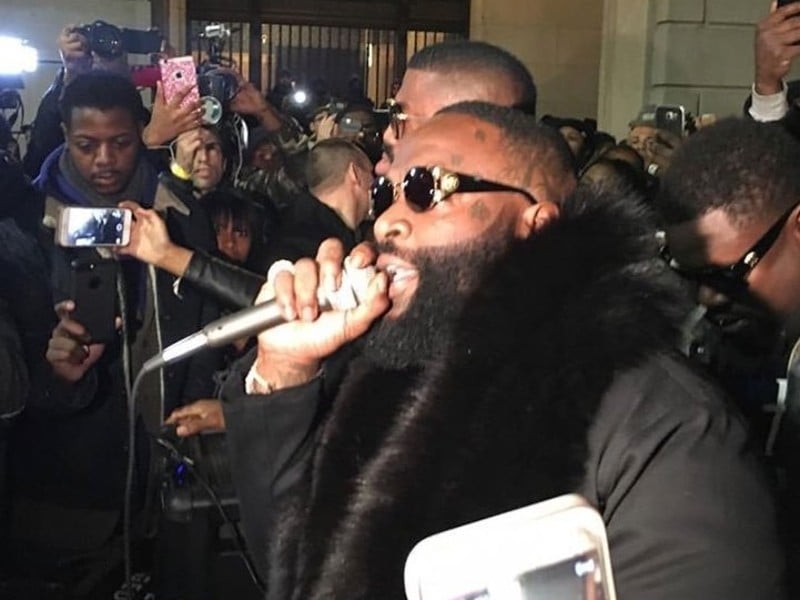 A large group of Meek Mill fans and Rick Ross turned out in support of the incarcerated rapper at Monday’s (November 13) Rally For Meek, which took place outside the Criminal Justice Center in Philadelphia, Pennsylvania.

Meek, whose real name is Robert Williams, was sentenced to two to four years in prison for violating probation stemming from a 2008 drug and gun conviction. The sentence has been deemed unjust by some, inspiring a petition for the Dreamchasers founder’s freedom.

I stand for @meekmill. I hope my city does the same. pic.twitter.com/DknOaaGrwG

Many in the Hip Hop community, including JAY-Z and Black Thought, have stood up for Meek and criticized the sentence handed down by Judge Genece Brinkley as being too harsh. Meek’s hometown fans took it a step further by showing up in full force on the streets of Philadelphia for the rally, which was highlighted by the attendance of Rick Ross.

Footage from the scene showed hundreds of fans chanting “Free Meek Mill.” Other videos featured the crowd tearing into a full rendition of the ever popular “Dreams and Nightmares” from Meek’s debut album of the same name.

Crowd now group-singing Meek’s “Dreams and Nightmares” off of his 2012 album of the same name. pic.twitter.com/ImXAeyGfVh

Earlier in the day, footage revealed the rally had attracted visitors from out of town, with full buses decked out with a “Stand With Meek Mill” slogan seen traveling to the protest.

Busses Filled With People On There Way To Support #MeekMill in #Philly ?? #RallyForMeek — @MeekMill pic.twitter.com/yVJkUj8uhS

Meek has already checked into prison but according to TMZ, his lawyer Joe Tacopina is filing a motion to get the judge removed from the case. The attorney is also making an official complaint to the judicial conduct board.