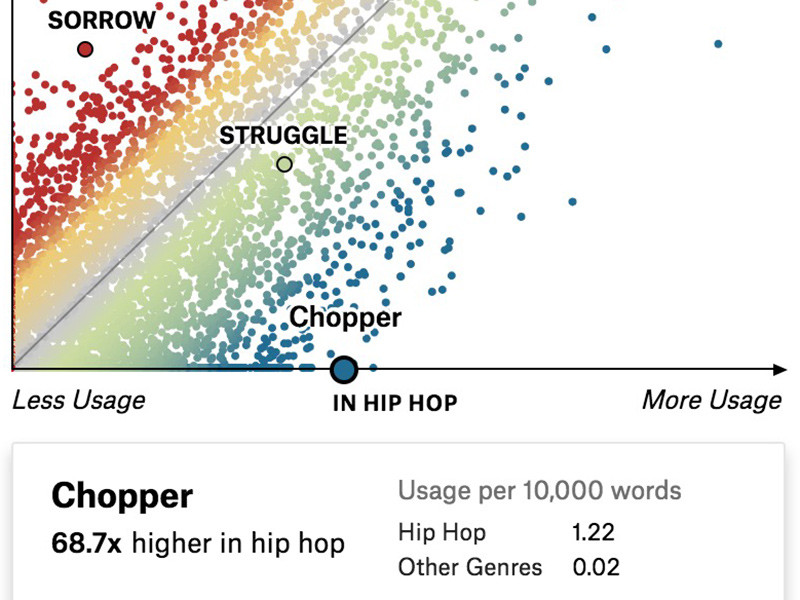 Ever noticed that the word “trapping” features in way more Hip Hop songs than it does in songs by Céline Dion or Dolly Parton?

Matt Daniels at The Pudding and a team of researchers put together a study that looked at about 50,000 Hip Hop songs from popular artists to uncover the specific words that are said way more often by Hip Hop artists than artists of any other genre. The study also compared Hip Hop artists to one another, to reveal which words are most unique to each artist.

Some proper nouns also feature — including Nike and Biggie. Which makes sense, since we can’t remember the last time Billy Joel or Bruce Springsteen sang about either of those things.

Unsurprisingly, some of the words you’re more likely to hear in a JAY-Z song include “Hov,” “Jigga” and “Roc.” Some are a little more left field, like Kendrick Lamar’s Top 10 including words like “Lucy,” “Abusing,” and “Vanity” (although his number one word is “Compton”).

In some cases what sets a rapper apart isn’t even a real word. Lil Yachty’s number one Most Yachty word is “Skrrrt,” for example, although Kodak Black, Drake and Migos are also known to use it.

In general, it looks like the words most unique to specific rappers tend to be their hometown or state, or a list of their own nicknames, or one-off words from unusual song titles — such as “Cocoa” from “Cocoa Butter Kisses” by Chance The Rapper.