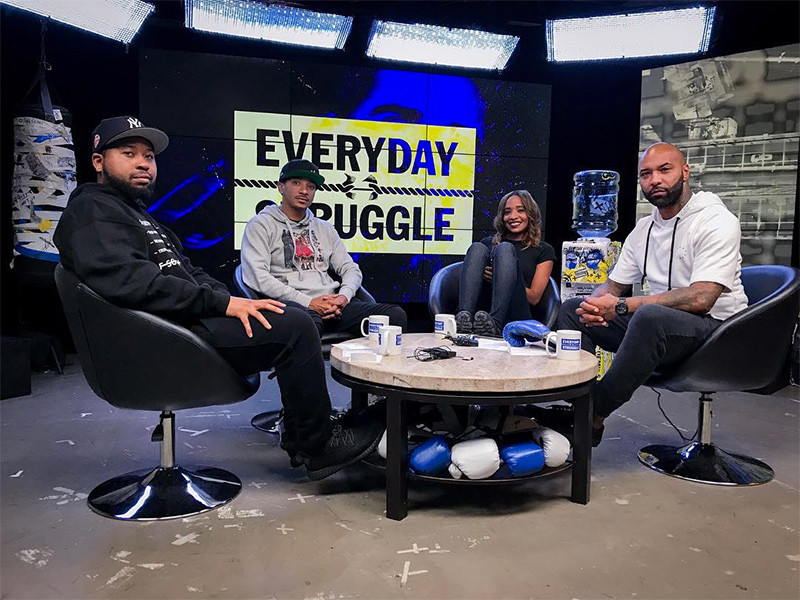 The last time we saw Hollow Da Don and Joe Budden match wits, they were both on stage at “Total Slaughter” trying to take each other’s heads off in a rap battle.

Fresh from battles in 2017 against Cali legend Dizaster and URL heavyweight Tay Roc, Hollow sat down with Budden once more — as well as with DJ Akademiks and Nadeska Alexis — for an episode of Everyday Struggle.

Asked about last weekend’s battle with Tay Roc on URL’s Summer Madness 6 card card, Hollow did some typical deadpan clowning, telling Nadeska, “I mean it was just humbling, first of all, to have my peers show love but … yeah, I got it.”

Joe Budden cleared up comments he made on Twitter last week on the current status of battle rap culture, explaining that he’s been falsely accused of saying that “battle rap is dead.” Akademiks also chimed in on this point, telling Hollow that it’s been a while since a battle event ended up on his “radar.”

Me & @joebudden Caption how this conversation went.

It’s a recurring theme in discussions about the culture lately. Major players in the scene have stepped away over the years, while many masters of the sport haven’t been able to match the performances or popularity of their peak. Output from premier U.K. battle rap league Don’t Flop has also ground to a halt in recent months after infighting between the staff.

Hollow gave a thoughtful response, saying “It matters what your perception of ‘dead’ is.”

Referencing the spate of mainstream attention the scene received in 2012 after Loaded Lux vs. Calicoe, Hollow asked “Is it alive because JAY-Z is tweeting it or because people are talking about it, like because Complex or these outlets are promoting it? That doesn’t mean it’s not alive, it just means it’s not in the mainstream eye like it was … But in our world, it’s alive and it’s doing better than ever.”

Meanwhile, URL’s Summer Madness 6 just sold out Irving Plaza, and the Eminem-produced battle rap movie Bodied was one of the biggest hits to come out of the Toronto International Film Festival.