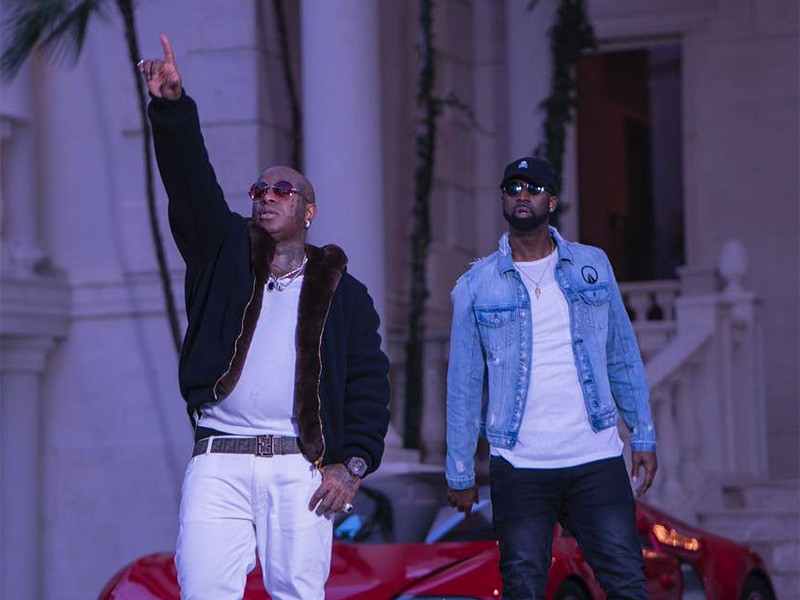 With the ink dry on his deal with Cash Money Records, Sy Ari Da Kid laid out why he chose to sign with the iconic record label in “Wire Transfer From Birdman,” which is found on his latest project, 2 Soon.

But fans weren’t ready for the lookalike of Birdman’s worshipper-turned-rival Rick Ross in the official music video for the track. HipHopDX caught up with the Atlanta resident while he was in Los Angeles over BET weekend to ask if there was any beef with the MMG boss.

“[The actor] was actually on set,” Sy Ari explained. “It wasn’t even like we were trying to say ‘Okay, let’s find a Rick Ross lookalike.’ My director Dontell Antonio — any time he has an idea, I like to run with it. So it just added some creativity to it … But you know any heavy-set dude with a beard and a bald head, and you shoot from the side, is going to be a lookalike, so it wasn’t like no diss or a response to anything. I thought it was just being creative, giving people something to talk about. You got to give people something to talk about, not necessarily meaning that’s what I’m talking about. So, if people want to gossip and spread it how they spread it, then that’s what it is. You leave it out there for the people, kind of like an unjudged battle. It’s like you don’t really know who won because it’s close. I like it like that. I like the people to have an opinion because, for some reason, nowadays, opinions are at an all-time high.”

Despite his label boss’ apparent issues with The Teflon Don, Sy Ari says he’s actually a fan of Rick Ross.

“I never personally met Ross. I’m definitely a fan. I’ve been listening to him since ‘Everyday I’m Hustlin’.’ But I think he’s one of the best artists in the game. Also, very well media-trained. I always watched how he did his interviews and how he carried himself. I’m definitely still a Ross fan. Him and Bird, they’re not in the street beefing like that, so it ain’t nothing where I got to choose sides. They’re grown men. They can figure it out on their own. But I got no problem with Ross. If I see him, it’s respect. I respect what he did in the game as well, even after Bird. They know some other stuff. They know Khaled and Wayne. They got personal relationships with these guys so I stay in my lane and mind my business. If I’m a fan, I’m a fan. I don’t really take nothing personal.”

He continues, “They both in Miami, so I’m sure if it’s real beef, they know where each other at. They know where they live at. They know where the studio. Everybody knows where The Hit Factory is. If it was really a problem — I’ve seen Wayne and Bird in a parking lot at the same time in the past few months, multiple times. Bird’s Bugatti over there. Wayne’s Wraith is other there, a couple spaces over. It ain’t no beef, so it ain’t no reason for me. Wayne one of my Top 10 rappers of all time, so I never get it twisted and goddamn try to, “Oh, Bird signed me. So it’s F them.” I don’t do all that. That’s corny. And he’s not saying it so, why would I?”

Sy Ari Da Kid also spoke on what it’s like working with the Cash Money CEO.

“With me, I like to wake up and take everything a day at a time. I’m spontaneous. I ain’t much of a planner. Even when I’m about to get on a flight, if the flight takes off at 6 a.m., I’m packing at 4 a.m. But he’s one of the guys that paved the way so we take the good and bad with the ugly. Whose reputation — how they talk about whatever — but my experience with him has been pretty good. He respects me. I respect him. He taught me a few things. Not even just verbally but how he moves. Strategically, being able to have his label stay at the top, how they find their artists and stuff, so it’s been good, though. And it’s been good to be around someone who did those type of things before I even came in the game. Just to learn those things from him, it’s solid.”

I told cash money at the office they gone have to make room for me on that wall!!! ✌??

Sy Ari also commented on Lil Wayne’s recent concert callouts of Birdman, but said he keeps out of their business.

“I haven’t talked to Bird about that. But it’s not my place to be like ‘Yo Bird, you heard what Wayne said?’ I don’t rock like that. So I’m sure in due time, they’ll figure it out hopefully for themselves. And then also just for the game and the kids that’s coming up — that’s looking at this situation. It’s gonna go down in history. It’s already in history on a negative standpoint. But hopefully it can end on a positive standpoint for the people. As well as myself and others just to learn from it. I’m into it. I’m watching. I’m holding my popcorn just like the next person. I’m just a little closer to the screen.”