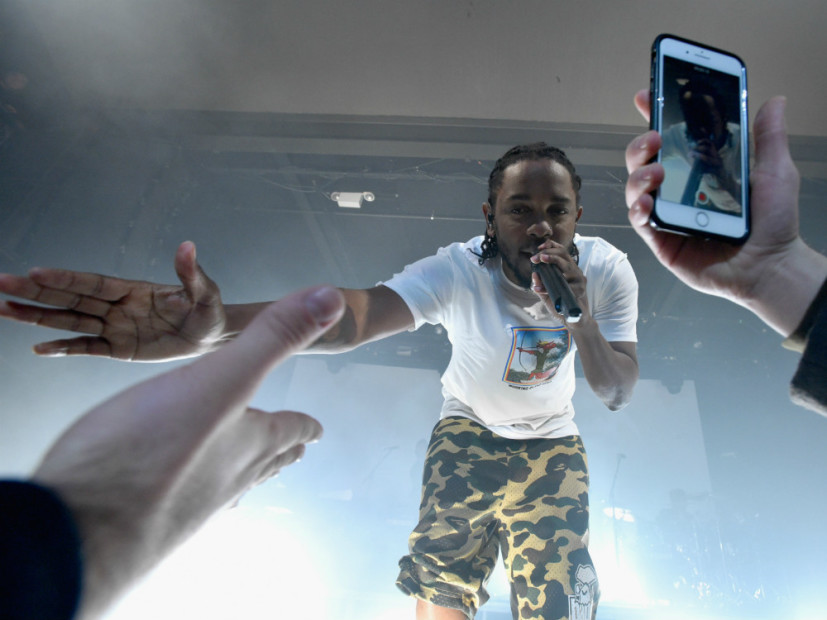 From K.Dot To Kung Fu Kenny: Kendrick Lamar By The Numbers

The question is still swirling about whether Kendrick Lamar’s DAMN. will go down as a classic. It hasn’t had the same cultural impact as 2015’s Grammy-winning To Pimp a Butterfly, but it has still made its mark on the industry, now becoming the biggest debut of 2017 so far numbers-wise (yes, beating Drake).

K.Dot has come a long way from his self-titled EP in 2009 to sharing a track with U2 on DAMN. Kung Fu Kenny has raked in several certifications and awards, as well as praise from fans and critics alike. DAMN. promises more growth in Kendrick’s platform and influence.

Let’s break down the numbers.

603,332 – The number of equivalent album units Kendrick Lamar pushed with his fourth studio album, DAMN. in its first week. This is the highest total for an album’s debut of 2017 so far, beating Drake’s More Life by six figures. K.Dot’s numbers come from 60 percent pure album sales, which were boosted by his album signing in Compton that was attended by 3,000 fans.

99 – DAMN.‘s Metacritic score shortly after its release. As more reviews have come in, the album has slipped slightly and currently sits at 96 based on 26 critics, which still puts it in the site’s Top 5 of all time, along with TPAB. DX gave the project a 4.9/5.

3,000 – The number of fans that Cornrow Kenny greeted at a Best Buy album signing in his hometown of Compton Thursday (April 20). The event lasted the entire afternoon and people brought multiple albums for the rapper to sign as they thanked him for his art.

#DAMN. near 10 pm, got down to the last of more than 3000 of our #TDE fam at the #Compton @BestBuy Much love! @KendrickLamar #DAMN. out now! pic.twitter.com/aQJX7n0I8m

6 – The number of years it took for Kendrick Lamar’s debut album, 2011’s Section.80, to be certified gold. The TDE-released project was officially recognized by the RIAA for surpassing the 500,000 sales mark on April 14, the day of DAMN.‘s release.

7 – The number of RIAA certifications the good kid has for his work. Not counting DAMN., which has technically already gone gold with its first week sales, Kendrick has gold plaques for the aforementioned Section.80, “Swimming Pools (Drank),” “Poetic Justice,” and his appearance on Sia’s “The Greatest.” He has reached platinum status with good kid m.A.A.d city, To Pimp a Butterfly and “Alright.”

324,000 – The number of copies To Pimp a Butterfly sold in its first official week. The project was a surprise release as K.Dot allowed it to leak ahead of its scheduled drop to coincide with the anniversary of 2Pac’s Me Against the World.

7 – The number of Grammys Kendrick Lamar has to his name. After the infamous snub, he won Best Rap Performance and Best Rap Song for “i” before sweeping the Rap category in 2016. Oh, and he has a golden gramophone for his appearance on Taylor Swift’s “Bad Blood,” which won Best Music Video. Where does K.Dot keep his treasured trophies? According to the “DNA.” video, under a picture of Snoop Dogg and Tupac, of course.

11 – The number of rappers Kendrick said he was trying to lyrically murder on his epic “Control” verse. On the Big Sean loosie, K.Dot named names as he called out J. Cole, Big K.R.I.T., Wale, Pusha T, Meek Mill, A$AP Rocky, Drake, Big Sean, Jay Electronica, Tyler The Creator and Mac Miller demanding they step their game up or he will make sure their core fans lose all memory of them. The verse rattled the Hip Hop community and there is some unsaid tension between Kendrick, Drizzy and Sean Don that continues through DAMN.‘s release.

5 – The number of years fans have been waiting for a joint album between Kendrick Lamar and J. Cole. The Dreamville boss confirmed such a project was in the works back in 2012 and since then, there have been various reports and hints that it’s still in progress.

6 – The number of years since Black Hippy dropped its self-titled mixtape. Jay Rock, Ab-Soul, ScHoolboy Q and Kendrick Lamar united forces for the 11-track project as each artist was also establishing his solo career under TDE. They have teamed up again for tracks like Jay Rock’s “Vice City” and recently remixed ScHoolboy Q’s “THat Part.” But will we ever get a full-length Black Hippy reunion?

14 – The age of a young man stopped by police officers in Cleveland in 2015 for seeming to be intoxicated. A crowd of attendees from The Movement For Black Lives National Convening in Cleveland gathered around to protest the teenager’s treatment by authorities. The group was pepper sprayed before the teenager was released to his parents. At the end of the ordeal, the crowd chanted Kendrick Lamar’s “Alright.” Ric Wilson was part of the scene and told HipHopDX what the song meant to the crowd, calling it the new “We Shall Overcome.”

“We’re in the street and we’re celebrating and folks put on Kendrick Lamar, ‘We’re gonna be alright,’” he explained. “Everyone just starts, it’s like a party. There’s this very, very beautiful moment where there was this butterfly and the butterfly literally, I’m not even saying this to be dramatic, the butterfly is flying over the crowd and like everyone, it’s just a very beautiful sight.”

3 – The number of I’s in “HiiiPower,” Kendrick Lamar’s anthem off Section.80 that has served as a mantra for TDE fans around the world. The number carries through the label’s entire branding, from Lance Skiiiwalker’s name to SiR using it for his iiinglewood SiR label. Zacari, who is featured on the DAMN. cut “Love,” points out that the song is 3:33 long. #HiiiPower.