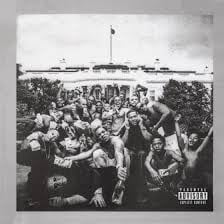 Kendrick Lamar has taken over the chart at #1 with the surprise release of his new album To Pimp A Butterfly. The success of the TDE rapper knocked the soundtrack to Empire’s first season down a spot to #2 and Drake made up some lost ground with a climb from #7 to #6.

Lower down the list, both Big Sean and Nicki Minaj fell a half dozen spots each in a single week, while J. Cole bottomed out at #28, the lowest spot his 2014 Forest Hills Drive record has seen since its release.

On top of consecutive single-day stream records on Spotify, Kendrick Lamar officially has the #1 album in the country. To Pimp A Butterfly sold a total of 324,403 copies since it was released, less than the million copies TDE’s Top Dawg hoped for last week. The number earns Lamar the second-best first-week sales performance of the year for a Hip Hop album. Drake pushed 494,746 units of If Youre Reading This Its Too Late within a week of his own surprise drop.

Still, To Pimp A Butterfly is Lamar’s most successful rollout to date. It was streamed nearly 39 million times over the past week and saw single song purchases from the album reach nearly 125,000. In late 2012, Kendrick pushed 241,000 copies of his album good kid m.A.A.d. city in its debut week and passed the million sold milestone more than six months later in 2013.

Despite a 16% performance drop from the week before, the Empire soundtrack easily outsold Modest Mouse’s new album, but fell to #2 at the same time. The soundtrack sold 88,971 albums over the latest sales period, bringing its total count to 198,556. The soundtrack was streamed more than 5.5 million times over the last week as well.

A month-and-a-half after its release, If Youre Reading This Its Too Late is still in the Top 10 at #6 this week. Drake’s new record stuttered 11% when compared to last week’s report, but still sold more than 24,000 copies, bringing its total sales up to 774,420. Despite trailing behind a handful of other albums, Drake’s record is the second-best streaming performer on the chart with more than 23.5 million tallied streams.