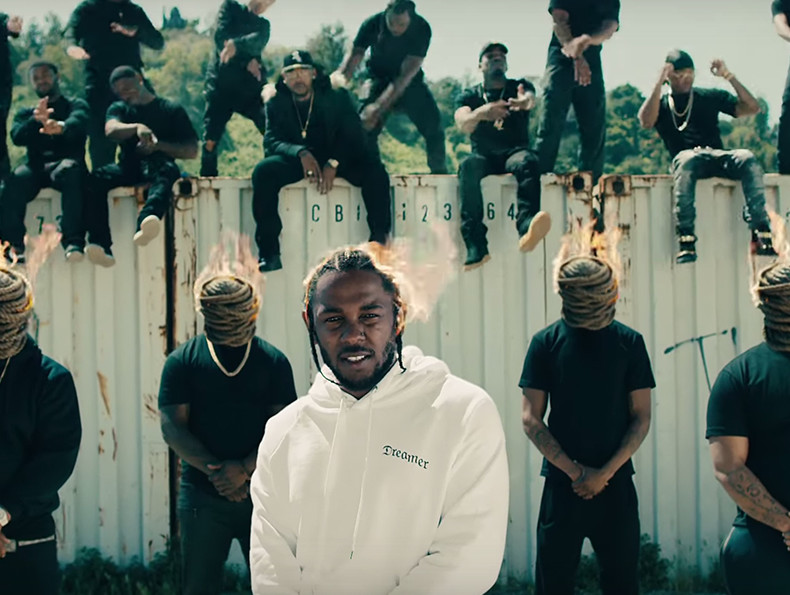 The dopest part about experiencing Kendrick Lamar’s release of DAMN., besides the obvious (music), are all of the small yet significant details, the unknown particulars and eerie illuminati theories surrounding the project.

As time gently inched closer to April 14, fans were gifted with hint after mysterious hint amid pristine excitement. Now that the project is here and available to be dissected, there are seven things music mavens should know about DAMN.

While everyone has been posting their best pictures of Kendrick in support of DAMN., TDE’s Punch had to stunt one time by unveiling a lost “PRIDE.” verse scribbled in red ink on a notepad.

This gives fans insight on how Kenny works in the studio.

Ok. Niggas wanna post they best Kdot pics cause the album out. How about this pic I got from Dot of a lost verse for the song PRIDE. Haaaaa. Yea. #stunt #idontdoitforthegramidoitforwellidodoitforthegram #lol #youfeelsometypeofwaythenaaaaahhhhhhaaaaa #yea

“Pride is my biggest sin/I tried to fight it but I never win/Layin’ myself down in the beds I made/Karma is always knockin’ with capital K’s/It started when I was tossin’ my life in the sand/Crossin’ the street, momma don’t you hold my hand,” the lost rap reads. “Time revealing itself my ways are magnified/Same patterns requiring that I never camouflage /Looking at me in shock you found my identity/Asking yourself do I have room 4 empathy.”

The song was produced by The Internet’s Steve Lacy, who impressed the “HUMBLE.” artist while in a session with DJ Dahi.

“The song I did for him came from this acoustic session that was recorded on my iPhone,” the 18-year-old producer revealed during an interview on Beats 1 Radio. “I showed Anna Wise how to record her vocals and she recorded this whole idea over these acoustic guitar chords I came up with, a small little drum loop that I made and then I took her vocal stems and made a beat over it.”

The song was originally titled, “Wasn’t There.”

This project comprises of so many legendary and well-respected Hip Hop producers in the game and among those are a few talented unknowns shrouded in mystery.

On “ELEMENT.,” James Blake, Sounwave and Ricci Riera are noted as the producers with additional production by someone named Bekon.

Turns out Bekon is actually Daniel Tannenbaum, a producer formerly known as Danny Keyz who has previously worked with Dr. Dre, Eminem, Snoop Dogg and RZA among other Hip Hop notables, Pitchfork points out.

As a matter of fact, working with 9th Wonder was a dream come true for Dot, a desire dating back seven years.

Kendrick and Teddy linked up in 2016 and after he recorded the song, Kenny told the 24-year-old Memphis beat maker, “Yo this is going to be big,” according to a Noisey interview with Walton.

“[Kendrick] was like, ‘Actually play anything… sounds… instruments… like anything you have, it don’t even have to be a beat,'” Walton explains. “So I just started playing all my older songs that I’m not even done with, just instruments and stuff and actually at that moment, he kind of didn’t seem too interested in some of the stuff that I was playing.”

Next thing Teddy knows, TDE is asking him to send over whatever sounds he played that day.

Word around the internet is that Kendrick Lamar is releasing a second album on Easter Sunday (April 16).

The theory was originally offered by a user on Reddit by the name of n9y25ah7_ and word spread of this possibility like wildfire.

But what if I told you… that's not the official version..

The rumors ran so rampant that in-house TDE producer Sounwave was forced to clarify his tweets.

Let me clarify some things…

DAMN.‘s lead single “HUMBLE.” takes on new meaning on the album version and while “The Heart Part 4” isn’t included on the project, it does subtly make its way onto “FEAR.”

“HUMBLE.” follows comfortably after “PRIDE.” which is segued into the next sound with a record scratch signifying an internal battle between having pride and being humble, as Pitchfork points out.

Internal conflict is a continuing theme Lamar has expressed in his music throughout his career. “PRIDE.” and “HUMBLE.” now come as a complimentary pair.

Remember when Geraldo Rivera criticized Kendrick Lamar over his 2015 BET Award performance of “Alright” because he vandalized a fake cop car on stage? Well, Lamar addressed the attack on DAMN. while utilizing a soundbite from the criticism.

Rivera gained attention and ad dollars as people tuned in to hear him calling out the Grammy Award-winning rapper, so Dot is now shamelessly monetizing off that commentary on “BLOOD.” and “DNA.”

“This is why I say that Hip Hop has done more damage to young African-Americans than racism in recent years,” Geraldo said in 2015 of Kendrick’s BET Award performance.

On “YAH.” he calls Geraldo out specifically. “Somebody tell Geraldo this nigga got some ambition,” Kendrick raps.

Geraldo has since responded to the inclusion with an 18-minute video and wishes Kenny hadn’t said his name at all.

“Aside from Drake, in my opinion, [Kendrick Lamar is] probably the best Hip Hop artist out there today,” Rivera admits. “I didn’t particularly care for the way he mentioned me,” he later added.

Get The “DAMN.” Physical

No need to wait to get your hands on the physical version of DAMN. The CD is available in stores now for a cool $13.99.

physical copies will be in stores 2mor ….. #DAMN.

It might be the reason why the album leaked in the first place.

No, not really. But with a project like DAMN. that will forever be incorporated deep within the Hip Hop history books, who can blame him for making such a smug statement?