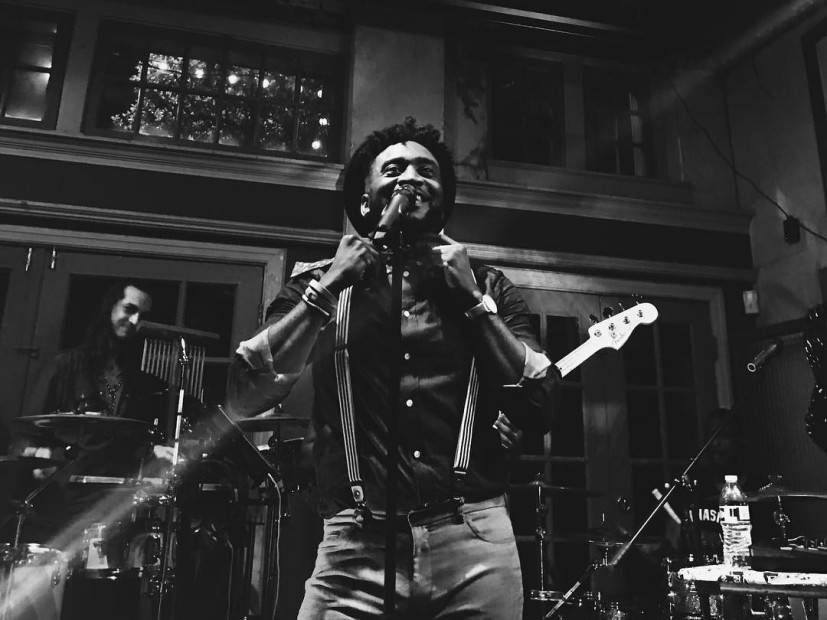 Atlanta, GA – Fans across the country will see Sho Baraka’s The Narrative album come to life on the Humble Beast rapper’s tour run, which stops in Los Angeles Sunday (April 9). In an exclusive interview with HipHopDX from his home in Atlanta, Sho explains how the event is not your typical concert.

“I’m trying to progress to a point where I do something that not many Hip Hop artists have done, which is kinda doing like a stage play,” he shares. “Not necessarily on the level of Hamilton, but something more — I guess you could say ‘progressive’ — than just a concert, but less than a full-fledged Broadway production. I wanna do something that is somewhere in the middle that respects the art of Hip Hop as well as respects the art of theater, but does something that marries the two worlds in a way that still has an element of a concert while at the same time displays my talent as a communicator, as a storyteller and actor. This is the show that I’m trying to use to get to that point, so it’s gonna be fun.”

He admits with a laugh that he hasn’t seen the Tony Award-winning Hamilton because he can’t afford the pricey Broadway tickets. Sho says that although he’s inspired by how Lin-Manuel Miranda’s play has bridged the gap between what is often viewed as the elitist world of Broadway and the streets of Hip Hop, he has found his own core audience that he’s trying to engage.

“I’m not necessarily trying to reach the elitist crowd,” he says. “I definitely want the same type of people to come to my show. Usually, those are the people who are somewhat educated, but they’re not necessarily well off or rich to lower class, anywhere from lower class, middle class, sometimes upper class people, but usually educated people, people who can vibe with my music. But I think those type of people want to see plays that reflect their life and their narrative. So this is something that I’m trying to progress towards. It’s not necessarily a Broadway play that has that air of New York bourgeoisie yet still has the specification of high art while at the same time integrating Hip Hop, which I don’t consider as a low art, but integrating Hip Hop and storytelling in a way that could be respected in both worlds, but still enjoyed by people who wanna pay $30-$40 per ticket.”

He finds much of his inspiration from civil rights leaders including Martin Luther King Jr. and says his And Campaign best exemplifies how he is trying to further Dr. King’s dream of bringing social justice to the world from a Christian perspective.

“The thing that we like to call ourselves is heirs to action, and that’s heirs as far as royalty, heirs to action,” he says. “‘Cause when you think about King and many of the civil rights activists, they were ministers, they were people who came out of the church. And a lot of times what we wanna do in modern culture is we try to secularize those movements or we try to invalidate them by saying those individuals were passive, weak and tools for the government or for the white man to make docile black people.”

He continues by saying the movement, founded with two of his close friends, seeks to define King’s place in history as different interest groups try to portray him in the light that best serves their agenda.

“There is kind of a sleight of hand effort right now to either make King and the civil rights movement very passive and saying their form of protest in civil rights was insufficient,” he says. “Or what we try to do is a lot of folks try to remove the religious element from them and just make them activists. Or what we try to do is we try to desensitize his education and his political or his intellectual astuteness. And the reality is he was all of those things. He was a minister, he was an activist and he was highly intelligent and a lot of those individuals during that time were and they were radical. We don’t see how radical nonviolent movement is and how smart of a tool that was. Only because of the nonviolent movement were they able to put to shame a lot of what was happening in Alabama, a lot of what was happening in Mississippi and that’s a powerful resource. So when you talk about his legacy today, I think there’s a lot of people who still appreciate the movement, who still recognize his significance and the significance of those people who served alongside him and we’re trying to live that out today.”

Sho himself is facing the process of establishing his identity as an activist and a Christian. He made headlines earlier this year when Christian bookstore giant Lifeway decided to remove The Narrative for the lyrics “I was an insecure boy who just thought he was a genius/But always pissed off, that’s because I thought with my penis/It’s all strategic, I’m just asking us the reason/Share my faith on the track, I’m just exorcising demons.” Customers complained over his use of the word “penis,” although the point he was trying to make was much deeper than anatomy. But if anything, this incident helped Sho further refine his target audience.

Bumped into an old friend today while in Nashville!

“The reality is is that I would be ignorant to think that my primary audience are those who frequent HipHopDX, but at the same time, I would be ignorant to say the people who support my music are the same people who frequent Lifeway,” he explains. “So if I know that neither one of those two avenues are necessarily solely for me, then I think what I need to start doing is figuring out how to develop a new lane. How do I create new institutions? Not necessarily me by myself, but how do people like me, and there’s a lot of us, how do we begin to navigate the worlds that we don’t fully fit in? We don’t fully fit in the mainstream market because there’s certain things about our content or our life that they just don’t wanna hear, which I get it. But there’s also the Lifeway issue where folks over there, they don’t wanna connect to what is authentically us as well. So there comes a point in time where we have to start really thinking about where we fit in this world and not trying to force assimilation, but evaluating our value and what we offer and stop allowing people to appropriate us. This is the same thing you could say is a microcosm for the African American experience as well.”

So he has been trying to create those much-needed platforms, whether it’s through the And Campaign, his High Society music collective, or his Forth District website. He doesn’t think he’s quite found the golden ticket to success, but is hopeful that he is paving a way for the future even if he doesn’t get to enjoy the fruits of his labor.

“This is the thing I’ve quickly realized, it can get exhausting when you’re creating these brands and these avenues and you don’t see the immediate impact and return on investment,” he reveals, “and I think that’s part of being a trailblazer and a trendsetter and I’m not trying to toot my own horn in no way or fashion, but sometimes the people who reap the benefits are the folks who come after you. And we have to be content with that and we have to celebrate and enjoy that as well.”

The hard work doesn’t stop, but Sho is encouraged by those who support him, especially as any Southern California show is a sort of homecoming for him. He grew up in the Inland Empire and shares why the upcoming performance will be another family affair.

“Every time I have the opportunity to go back, it’s beautiful, I love the state,” he says. “It reminds me of amazing transitions in life. Family doesn’t often times get to see me perform, so when I go to L.A., I usually have a significant amount of family members that come check me out. So this is gonna be no different. Folks who’ve been rocking with me and it’s also the place where I kinda developed my love for Hip Hop. So right now I try to give it that extra bit of love.”

Enter here for a chance to win a VIP package to A Night with Sho Baraka Sunday (April 9) at Resident in Los Angeles.