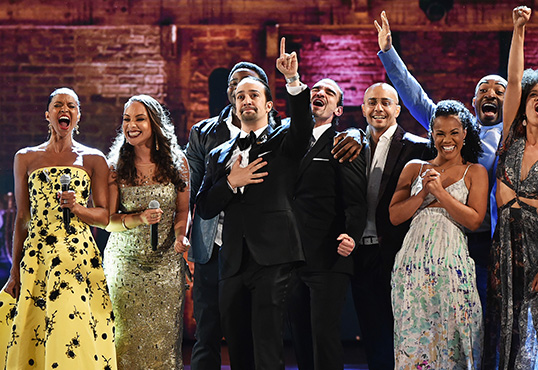 The musical has become a phenomenon since its debut, already winning the Pulitzer Prize for Drama and the Grammy for Best Musical Theater Album in 2016.

The awards’ 70th annual ceremony was overshadowed by the mass shooting at a gay club in Orlando, Florida that killed dozens of people this past weekend, with many speeches making reference to it and host James Corden saying, “Our hearts go out to all those affected by this atrocity. All we can say is you’re not on your own right now — your tragedy is our tragedy. Theater is a place where every race, creed, sexuality, and gender is equal, embraced, and loved. Hate will never win.”

The cast of “Hamilton” performed “Yorktown (The World Turned Upside Down)” at the show.

And Miranda posted a photo to Twitter in celebration.

My mom y'all. It's been a bit of a day. pic.twitter.com/TqpAAnybpB