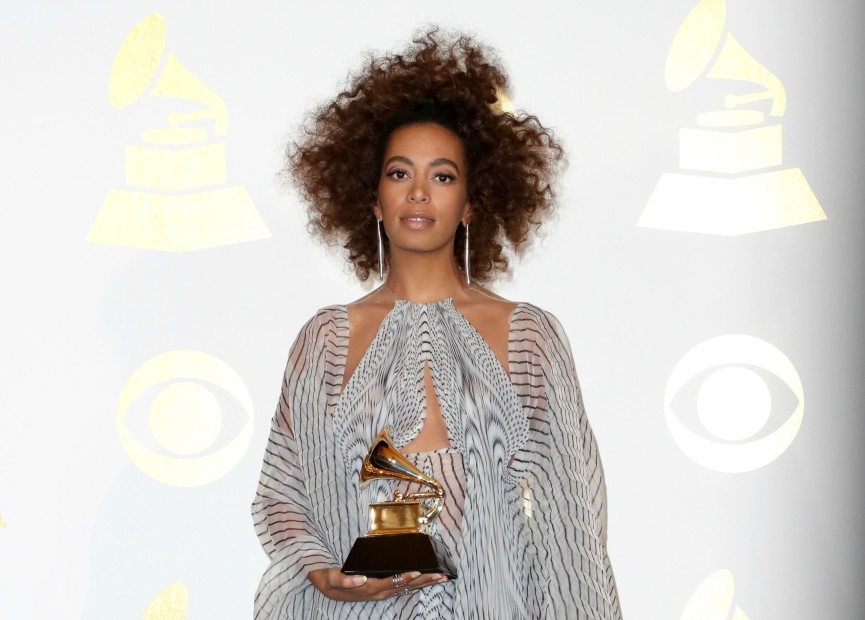 Los Angeles, CA – While everybody had their eyes feasted on Queen Bey during the 59th annual Grammy Awards on February 12, the biggest winner comes in the form of her baby sister, Solange, who just won her first Grammy ever. The R&B singer took home the award for Best R&B Performance for her song “Cranes in the Sky,” which comes from her breakout album A Seat at the Table. Not only did this project hit number one on the Billboard 200 back in October of last year, but it was praised by some of today’s music’s greats and named HipHopDX’s top R&B project of 2016.

Tucked away in the media center at Staples Center, HipHopDX had the pleasure of hearing Solange’s exclusive post-Grammy speech, almost immediately after Solange went on stage to retrieve her trophy. This Grammy nomination had her up against steep competition, such as Rihanna, BJ The Chicago Kid, and Musiq Soulchild.

After expressing her love and gratitude for the “wonderful, wonderful night,” Solange speaks on her mother’s support with her and Beyonce.

“I think that just her love and support for both of us has just been a completely a beautiful love story. We continue to honor her and all that she has shown us by example. It just feels like such a joy to have her be part of the album, and to kind of pay that forward.”

She also spoke how fashion plays a role in career, always bringing it back to her identity as a black woman.

“I think that visual art in all aspects are super important to me, whether it be a creation of my videos or my album artwork. Creating strong visual representation, not only of myself but again, black women and getting to see us as avant-garde beings, in a world that sometimes puts us in the boxes, is really important to me.”

Before she got off the makeshift stage, Solange took a moment to praise an artist she personally looks up to this day.

“I look at Nina Simone and Marvin Gaye and the artists of our times that have really pushed political messages through their music and their artistry. I think that all that we can do as artists, and especially as songwriters, is write about what’s true to us. And I think that the music that is out right now, and really connecting and thriving, reflects that. I’m really grateful to those artists who are paying it through because it’s not easy. It’s scary, we’re putting ourselves out on the line.

Besides being a jazz singer, pianist, and songwriter, the legendary Nina Simone was also a civil rights activist.

“I just honor the greats. I look to Nina Simone, who did that during a time where . . . it’s interesting trajectory of her career now, she’s being so celebrated. She was really shut up during that time. She was really told to just sing. Those were the artists who paved the way for us to do what we’re doing now. We’re not doing nothing new.”

Congrats to Solange for “Cranes in the Sky,” And let’s not forget the remix with Common.