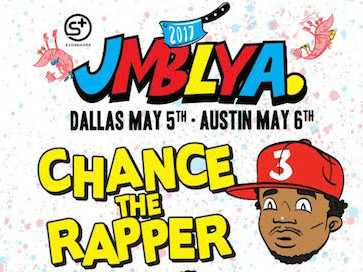 Austin, TX – Hip Hop will be taking over Texas the weekend of May 5 and 6 as JMBLYA announced the full lineup for its fifth annual festivities today (February 10).

Chance The Rapper is performing as the headliner for both shows, first in Dallas at Fair Park and then at Circuit of the Americas in Austin. This comes after the success of his Coloring Book mixtape, which was named HipHopDX’s Best Album of 2016 and is up for the Grammy for Best Rap Album.

Joining the Chicagoan are Atlanta’s Migos and Gucci Mane. The trio is riding high with the success of its Culture album and “Bad and Boujee” single sitting pretty at the top of the charts. Guwop is gearing up for the release of his first album of the year, Droptop Wizop, after winning last year’s “We Working” Award from HipHopDX for his serious output.

YFN Lucci and 6LACK will also be repping the ATL at the festival.