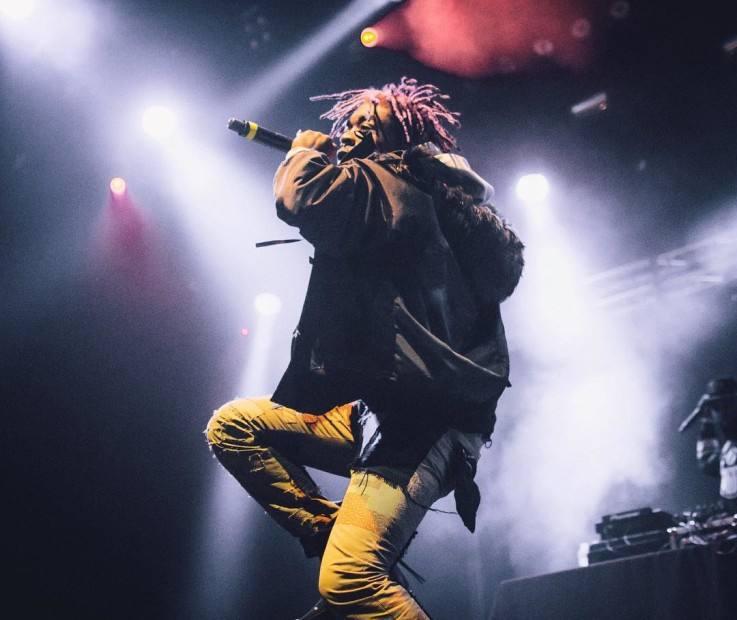 The last day of 2016. . . choose your plans wisely. No matter what it is, you will always remember what you did on New Year’s Eve. My choice: Lil Uzi Vert at The NOVO downtown. You know I wasn’t missing this show. I am a Lil Uzi fan if there ever was one. He’s so lit(tle). He’s my spirit animal (along with Thugger).

I was definitely here last night for Kaytranada. This time, we were in the pit. Amongst the children. Yes, children. My girl and I were tripping about being the oldest ones in the building, but hey. I’m here for Uzi. Now that I think about it, chanting “Uzi Gang” along with the rest of the gang probably made me look like a kid. Cool.

i love @Skeme and all but this photographer in the pikachu onesie is KILLIN IT pic.twitter.com/jcMuN1MnRi

First up, Skeme. He was added to the lineup last minute. We actually fuck with his music tough, so we were excited. Hearing him play “36 OZ” (featuring C Breezy) made our night. I thought it was funny because Goldenvoice had him listed as “Local Support” on their set times list. It’s true, he’s from Inglewood, but I think he deserves a little more credit.

Skeme opening for Lil Uzi Vert at The NOVO.

Skeme just dropped a mixtape called Paranoia, which is actually really good. There’s a track with Uzi called “FIZ U” that’s fire. I thought it was cute he was opening. It definitely gives him exposure, although I’m not sure the kids will be Googling him later.

Next up was Roy Wood$, who I just saw at The Roxy in L.A. That was probably one of my favorite shows of the year. He brought out Drizzy. Salute. Tonight, he played his hits all over again, closing out with “Drama.” So, my goal for the night was to convince my girl Roy is legit. I gave her tracks to listen to beforehand, but she wasn’t feeling it. I told her to wait until the show (dance moves on fleek). She wasn’t impressed. Sigh. Can’t win ‘em all.

Uzi comes on stage late af, but what’s new? The show was literally lit. He played us all his hits. Fans were screaming out songs they wanted to hear all night. “Money Longer,” “Top, “Ps & Qs,” “Pull Up” with Wiz, “Too Much Sauce” with DJ Esco,” the list goes on. At one point, someone jumps from the top balcony into the crowd. Security went nuts.

Can’t forget about New Years. We had our own countdown, and it was epic. “WDWY” was low key the perfect anthem to ring in 2017. The champagne was on deck and ready to be popped. ICYMI, not sure what the deal is, but I guess he’s not signed to Taylor Gang. DJ Drama clarified he is signed to Generation Now. Smh. I was excited for #TGOD.

Uzi performing on top of the crowd.

He introduced “7AM” by saying it was one of his favorite songs, and that he made it when he was going through some shit. “SideLine Watching (Hold Up)” is one of my more recent favorites. He ended the show by getting on top of the crowd and playing a new track from Luv Is Rage 2.

Please drop that soon, Uzi. Here for it.

Happy New Year. Who woke up feeling exactly the same? People are putting 2017 on a damn pedestal. My take: be amazing all the time. No resolutions. Just slay. My mentality is you can always do better. You can always better your craft, and you can never stop learning. Okay, pep talk over.

Tonight, I saw this adorable movie Sing, featuring the voices of Matthew McConaughey, Reese Witherspoon, Seth MacFarlane, Scarlett Johansson, John C. Reilly, and more. Cartoon movies are the new wave. We walked into a very crowded 7:30 p.m. showing at The Grove. No surprise here- it was a holiday. The movies are the perfect family (and friends) outing, especially this one.

The film sees a koala bear (Matthew) trying to save his theater with a singing competition, which ends up being blown up far beyond he could imagine. It became this amazing opportunity for aspiring singers (animals) to finally have a chance to shine. Basically, follow your dreams, guys. They do come true. I feel like I’m beating a dead horse but. . . just work hard, and don’t ever give up. It will pay off
And if you sing, go see this movie.

January is my favorite month of the year, irrelevant to my birthday being in a week (fml). Today was a holiday for most. Same deal as the day after Christmas when it falls on a weekend. My good friend whom I hadn’t seen a while was in the area, and we were scheming of things we could do. Clippers game for 15 bucks? With it.

Shout out to Stubhub, the second place plug. The real plug was my boy who plugged us with the best seats in the house. . . until the season ticket holders came during halftime. Smh. We enjoyed the view while it lasted. Basketball games are the perfect time to catch up, whether or not you’re a fan. Me personally, it’s my favorite sport. My girl could care less. But she was down for the cause.

I love the energy at these games. It’s always entertaining to watch, even if you don’t follow. PSA, I’m a Warriors fan. And I hate the Lakers so the Clippers will have to do. I do fuck with Crawford, that’s my favorite player. Sadly, no one cares about the Phoenix Suns (sorry if you’re from Arizona).

I wanted my homeboy’s booklet so bad. That shit was clean. Apparently, we also missed the DeAndre Jordan bobblehead. Only the first 10K that showed up got one. Damn. That fool is tall. Would love to see how tall they made him as a bobblehead. Clippers with the W.

The true definition of #FOMO. Look up #EnchantedLA on Instagram and you’ll understand why. I first heard about this when my friend tagged me on Facebook. And then my brother went with his bae, which made me want to go even more. I went to L.A. Zoo Lights last year, which were similar, but this was way more lit.

This shit was interactive and mesmerizing. All the lights on these tulip flowers were changing colors. It was my favorite shade of purple, mixed with blue, red, turquoise. . . a neon rainbow. This was the first display. There were eight, each named something different. As much as I wanted to snap a pic of each sign, my hands were too damn cold. Literally, frostbitten.

All of the lights.

The event is called Enchanted: Forest of Light, and it takes place at Descanso Gardens, a 160-acre public garden in La Cañada near Los Angeles. Where is this? No clue. I picked up my homie from Hollywood, and it was about a 24-minute drive over. The view on the drive is really beautiful, overlooking L.A. I never really appreciate how gorgeous the city is at night.

It was foggy, and it was cold. That was literally the only feedback my brother had from his trip. It was fucking freezing. I was so sad I forgot my gloves that I brought back from the Bay. Literally, this would be the only time I would need them down here. Smh. I actually knew two couples that were already inside that night, and one had warned me the line was nuts. It was. We had tickets for the 9 p.m. slot and the line was still long af. We accidently cut in the middle. Accident.

Another epic win. I got away with buying two child tickets, for $24 instead of $28. They didn’t even notice. I had a backup story in case they did, though. You know I did. This event is popping, which means you need to get tickets in advance on their website. They were pretty serious when I called earlier in the day.

They actually only had a couple slots left for the evening, so we lucked out.

It’s a one-mile walk through the beloved Descanso Gardens. We kept saying we wanted to come back during the day. It’s probably a whole different ballgame. There are signs and workers with glow-in-the-dark wands to lead you the right direction. There was hot cocoa (and food) you could purchase- which tempted me to ask for a cup of hot water, just to hold it. At this point, the coldness had seeped through my military boots. Frostbite. 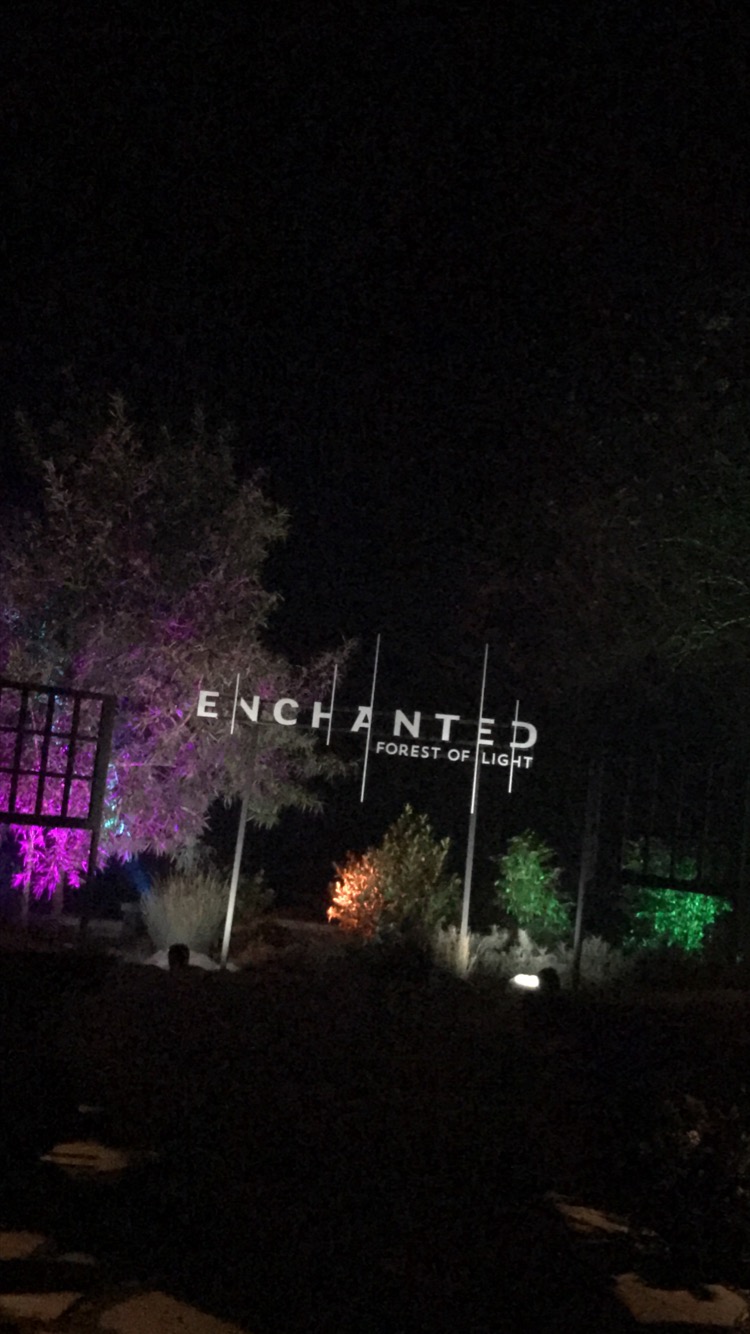 The beginning and the end.

We were there past 10 p.m., at which point a worker was angrily hurrying everyone to exit. He wouldn’t even let us take a photo at this designated photo opp. We skipped it in the beginning because the line was too long. Smh. And then, out of the corner of my eye, I see my friend hold up his phone to snap a selfie. Rebel.

It’s open until January 7, FYI. You can still make it.

Every year, I try to make it a point to go ice skating during the holidays. It’s always a good time and I just moved downtown, so I had to. There’s two spots you can hit: L.A. Live or Pershing Square. I’m so glad we chose Pershing Square. Not only was it cheaper, but it was significantly less crowded. I remember seeing the line at L.A. Live when I was heading to the Clippers game, it was a joke.

The one thing you do miss at Pershing Square: the glorious Christmas tree. There were still Christmas lights, but the tree at L.A. is literally massive. We chose the 8:30 p.m. time slot, which we purchased on Eventbrite earlier today. It was extremely empty. We thought it’d be packed, but the rain definitely scared everyone away. Not us, we were committed.

If you can’t skate…

This little kid on the penguin helper made my night. Not only was he adorable, but I also wanted his penguin. When I first stepped on the ice, I could barely move. I was terrified of falling. It actually upset me a little, because I thought I was way more capable. After a few rounds, I had it down. I was gliding and loving life.

This is such a fun outing with friends. We had a ball. When 9:30 p.m. hit, I was so sad. I didn’t want to get off the ice. I was literally about it. We were laughing because our homeboy was sweating. It’s a workout guys, come prepared. PS, the total cost was around $16 to skate for an hour, skate rentals included. So worth it. I found street parking too. Halla. (If not, there’s a lot underground for $7).