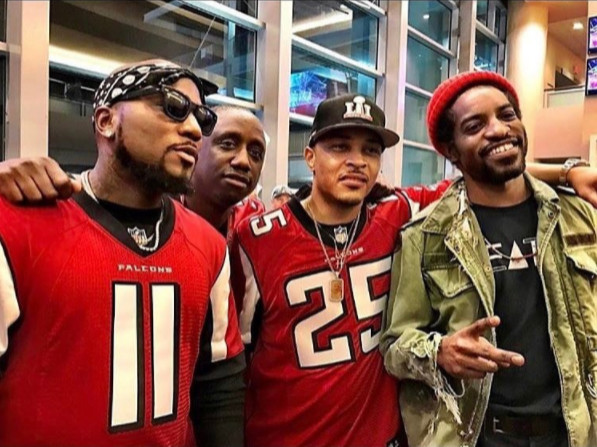 T.I. Denies He Took Side Chick To Super Bowl LI

The Internet – When a T.I. superfan (read: Stan) posted a photo to Twitter of the Atlanta kingpin standing next to a “mystery woman” at Super Bowl LI, naturally, social media went nuts and immediately began speculating on who the lady in white was. Despite being identified as an executive with the NFL, that didn’t stop people from calling her his “side chick” and assuming his divorce from longtime wife Tameka “Tiny” Harris was definitely happening despite signs of a possible reconciliation.

Tiny and TI getting a divorce, I know marriage isn't for me… ???

T.I. appeared to take it all in stride and took to Instagram to post a response with a caption that read, “I was telling @angelayee watch where she stand cause anybody I stand next to ends up being my side piece. LOL- insert sarcasm Nah Fareal tho #YallLameAsHell #LetYouTellit #TraethaVP #HustleGangOverErrrrthang.”

According to an anonymous source, Tiny was in tears over the photo. “T.I. really doesn’t know how much damage he caused by taking a picture with that woman,” the source said. “Their children are social media pros and are asking Tiny who the girl is that dad’s taking pictures with. Hearing them ask that question broke Tiny’s heart and she held back bawling in tears so the kids wouldn’t see or hear how much pain she’s really in.”

Check out a few of Twitter’s reactions below.

I'm happy T.i found him a woman worth showing off cause tiny wasn't the move

Dang Ti and Tiny really getting a divorce

Who cares if T.I came to super bowl with another woman? If he divorced doesn't matter either??

How Tiny gone file for divorce then say TIP gotta come back to her..? Females be delusional, and she the one who messed up? ✋??