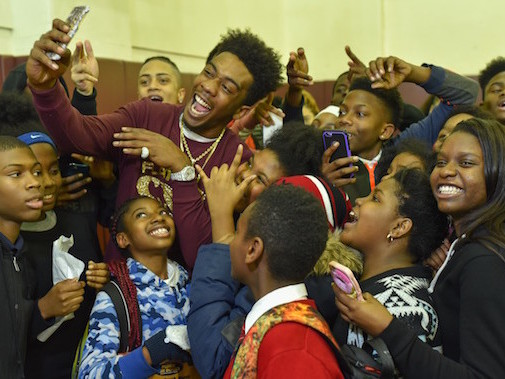 Brooklyn, NY – At just 19-years-old, Desiigner is to a large extent a kid himself, but the rookie rapper from Brooklyn has had one hell of a grown-up year. His Grammy-nominated debut single, “Panda” achieved iconic status by hitting the top spot on the Billboard Hot 100 and the Kanye West co-sign kept him (and the song) hot, well after accusations of biting Future dwindled off into distant memory.

So with a successful 2016 underneath his Gucci belt, Desiigner felt like it was only right to return home for the holidays and surprise 150 kids at the Madison Square Boys & Girls Club in Brooklyn with gifts, autographs, photo-ops and an overall yuletide turn-up.

“It feels good to be able to do something in my hometown that would make the kids’ holiday a little brighter,” Desiigner, born Sidney Royel Selby III said of his special guest appearance. He also stressed to the youth the importance of giving back to the community.

The Madison Square Boys & Girls Club in Brooklyn is not only a fixture in said community but one within the entire organization, for it has been standing firm since 1984.

Check out Desiigner playing Black Santa via the images below.