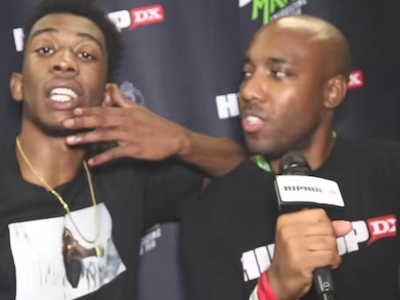 Desiigner has earned comparisons to Future and also has a single, “Pluto,” which happens to be the title of the Atlanta rapper’s 2012 album.

As for the distinctive way he spells his moniker, Desiigner says a family member gave him the idea.

“My little sister gave me that shit,” Desiigner says. “She said the girls would love it, so I put two Is on it.”

Desiigner is also part of the G.O.O.D. Music family and appeared on Kanye West’s The Life Of Pablo album, which was released last month.

He says he was happy to appear on the collection’s “Pt. 2” and “Freestyle 4.”

“It felt great,” Desiigner says. “I feel like that’s where I need to be at. Hey, I’m part of G.O.O.D. Music. Why put it on there?…I’m just always prepared and ready for big opportunities like that, so when it came, I embraced it.”

Although Desiigner says he can’t talk about potentially working on the updated version of The Life Of Pablo, he says he knows how to not be labeled a one-hit wonder after the success of “Panda.”

“Drop some more heat,” he says.