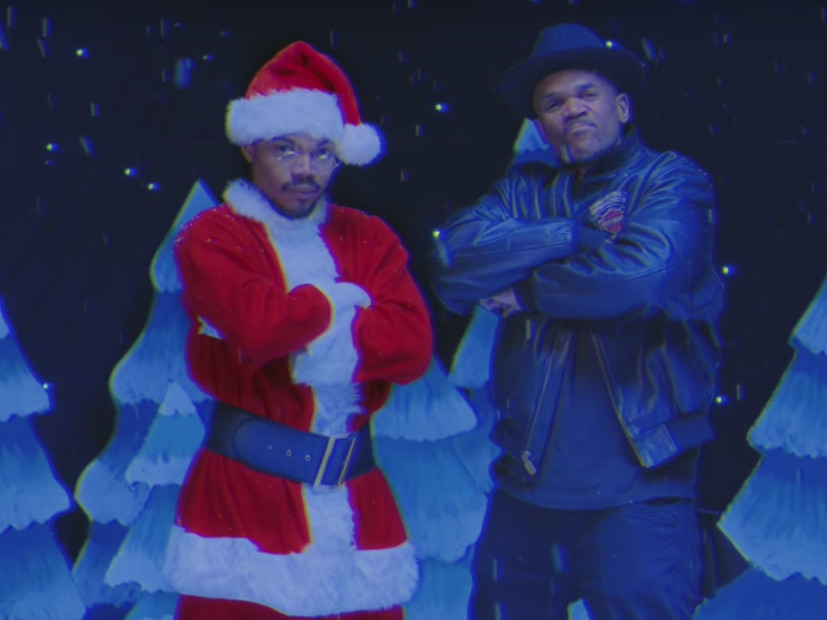 New York, NY – On Saturday (December 17), Chance The Rapper was the musical guest on Saturday Night Live, which was hosted by actor Casey Affleck. No one was really expecting Darryl “DMC” McDaniels of famed Hip Hop duo Run-DMC to make a cameo during the “Jingle Barack” skit. But sure enough, the Hollis, Queens native and co-creator of “Christmas In Hollis” was suddenly rapping alongside Chance in a hilarious classic Hip Hop style song in honor of President Barack Obama’s last Christmas at The White House. The whole thing was apparently the result of a special request.

“It actually was a last minute thing,” DMC says in an exclusive interview with HipHopDX. “I was in Philly speaking to children at a library about the power of creativity and education when ‘SNL’ contacted me and said they wanted me to play Chance’s dad. He had specifically requested me. He wanted a ‘Christmas In Hollis’ based video and thought it would be awesome if I appeared in it. That was Thursday and by Friday evening, I was there shooting the scene.”

As Chance donned DMC’s signature oversized glasses and a huge gold rope chain, it appears it was as much an honor for the seasoned MC as it was for the young Chicago rapper.

“It’s very humbling and at the same time inspiring,” DMC says. “It makes me more responsible to all the new music I’m making and keeps me focused on doing cool, fun generationally impactful things.”

DMC was also surprised to have a full circle experience during production. The day they filmed it, he reconnected with two people he never thought he’d see again.

“There was two guys on the production team who did videos with me 30 years ago,” he says. “One dude worked on ‘King of Rock’ and the other worked on ‘Walk This Way.’ Here we are 30 years later doing this on ‘SNL.'”

For many, seeing Chance and DMC rap alongside each other was a moment where the generational gap was momentarily bridged. It was also yet another Hip Hop act gracing the SNL stage, which seems to be happening more frequently as of late. Last month, A Tribe Called Quest appeared on the Dave Chappelle-hosted episode while Drake got his shot in May.

“The Tribe-Chappelle episode was incredible,” DMC says. “I gotta kill it when I’m a musical guest in 2017. I’m gonna bring Joan Jett or maybe Tim Armstrong, or maybe four artist friends at once.”

Often times, pioneering Hip Hop artists are quick to shoot down the newer generation of rappers, but DMC believes both can harmoniously exist in 2016—as long as there’s balance.

“Lyrics and content and meaning never left,” he explains. “It’s underground where it should be ’til the surface dwellers suffocate and choke on the nonsense. There’s a lotta lyrics out there, though—Chance, André 3000, Jay Electronica, De La Soul, Joey Bada$$, Kendrick, and Chuck D for example—all these guys should be in rotation, not just the same eight songs over and over.

“The real issue is these fake-ass radio stations are afraid of the positive power of generationally impactful educational and positive Hip Hop music,” he adds. “The so-called popular rap isn’t popular ’cause everyone ain’t rockin’ to it. Only those that are rockin’ to it are rockin’ to it. These stations use the negative bullshit as a false sense of power, so they play a lot of crap because they think it makes ’em cool and hip. I’m from, and still am from, a generation of ‘young’ people whose music amazed all people—young and old. It’s not about production ’cause a lot of it all sounds the same. That being said, there’s a bunch of great ones me and my fellow artists would murder if we got on ’em.”