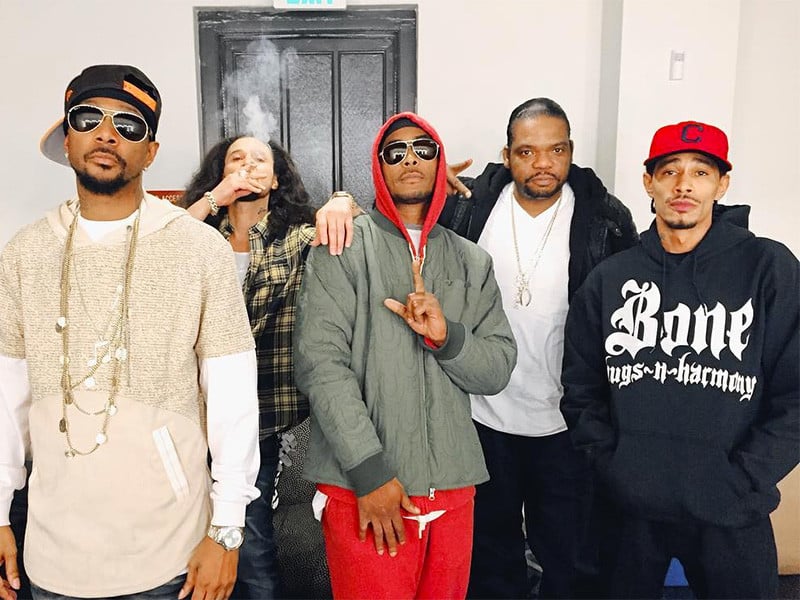 Behind the scenes, longtime Bone Thugs manager Steve Lobel and agent Jamie Adler were expertly orchestrating set times, organizing interviews and making sure everything was running smoothly. It’s a once-in-a-lifetime chance Adler couldn’t believe he was given.

“Big A and Percy [Snoop affiliates] reached out and asked if I wanted to be the booking agent for the second Puff Puff Pass Tour,” Adler says. “I nearly dropped the phone. Fast-forward three months later and we are touring the country selling out arenas in blizzards [laughs].”

Backstage, four of the five members of Bone Thugs were munching on carrots and pineapple in the appropriately titled “green room,” including Krayzie Bone, Layzie Bone, Flesh-n-Bone and Wish Bone, who were gracious enough to speak on the tour. The only one absent was Bizzy Bone.

When #hiphopdx shows up in #colorado to do a interview with #BTNH for the #puffpuffpasstour and want all 5 members #wishbone #layziebone #weworking ??

“We got word through our management that Snoop Dogg was looking to get a tour together called The Puff Puff Pass Tour Part 2,” Layzie said. “Having mutual friends, we heard about it through the grapevine and it all came together. Steve and Jamie made it happen. It was just inevitable, really.”

“It’s going amazing,” Flesh-n-Bone added. “It’s a beautiful blessing to be out here rockin’ and rollin’ with Snoop and everything. The whole Dogg Pound and the crew are just incredible.”

Snoop wasn’t as easily accessible and had a small army of giant bodyguards standing outside his dressing room door (one was even called “Big Wall”). Easily over six-foot, eight-inches tall, they wouldn’t even crack a smile.

“They some mean mother f-ers,” Flesh joked. “They some serious sons of guns. They got something to do. They have to do their job very well.”

As heavy weed smoke continued to waft through the air (it is the Puff Puff Pass Tour), Krayzie was posted up in the corner and expressed gratitude for the opportunity to tour with artists he had grown up listening to in his hometown of Cleveland, Ohio.

“It’s a wonderful thing for us to be out here with Snoop, Warren G and Dogg Pound,” Krayzie said. “It’s a great look. So far, all the shows have been crazy. The fans have been responsive to every act that came out. It’s going down. What’s crazy is we grew up off all this music.”

“We came up with Snoop and all them dudes,” Wish Bone added. “It feel real good to be a part of this legendary thing because we all came up under the same umbrella: Eazy-E. Without him, none of us would have nothing right now. It feels real good to part of this movement.”

One of the highlights of the show was Bone Thugs’ flawless performance of “Tha Crossroads,” a remix of “Crossroad” from the group’s 1995 classic, E. 1999 Eternal. After their mentor Eazy-E died shortly after its release, they remixed the song and released a video that featured Eazy-E looking down on them from heaven, something they remember every time they perform the song.

“We definitely think of Eazy when we perform it,” Wish Bone said. “We did the remix to the original for people that died and we always think of Eazy-E and all those people immediately.”

The Puff Puff Pass Tour 2 continues through December 30, where it wraps up in Las Vegas, Nevada at The Joint.