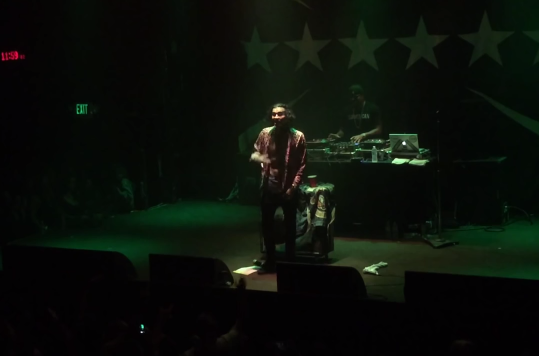 2016 was supposed to be the year of the Slumerican revival. Yelawolf, after publicly breaking up with girlfriend, alternative singer Fefe Dobson, shifted his focus back into his label. There was a website revamp and EP releases from both himself and Bubba Sparxxx, who was equally as eager to get back in the rapping saddle.

To literally get the show on the road, the subsequent tour Trial By Fire Tour was announced and Catfish Billy & Co. blitzed through cities such as Los Angeles, Boston, Detroit and Chicago without a hitch — but all that came to a screeching halt yesterday before the Tucson, AZ leg at the Rialto Theatre could even take place. Yelawolf and his team have yet to put out an official statement on what happened and requests sent from HipHopDX have gone unreturned.

Despite the mute treatment from Yelawolf’s camp, erratic behavior, evidenced from some recently surfaced tour footage may have played a big part in the tour’s cancellation. During the show at Eugene, Oregon’s WOW Hall on November 16, the 36-year-old rapper, who is still signed to Eminem’s Shady Records, was spotted destroying equipment on stage and giving a speaker to the audience to destroy at will. Then a few days later in Santa Cruz, the volcano fully erupted when Yelawolf cut his set short to begin a rant before slamming the mic on the stage and angrily engaging a fan who immediately got passionate when he realized the curtain had closed.

“Keep going? Because I’m a slave?” he growled. “I gotta keep going for you because you paid me muthafucka? I’LL FIGHT YOU.”

That’s usually how fan/rapper concert business transactions go, but not in Yela’s world. After a few moments of hesitation, he lunged into the crowd before Struggle Jennings and others pulled him back on stage. After a rambling rebuttal, the show ended unceremoniously, leaving the audience confused and dejected.

The good folks over at Roughstock did a bit of digging and confirmed that the remaining Trial By Fire dates had been nixed from existence, noting that he had also changed his Instagram handle to his government name: @micheal_wayne_atha. They also captured some Instagram screenshots of Slumerican rapper Struggle offering up a bit of insight in his comments.

“Tour was cancelled..We tried to do remaining shows but not in our control,” Struggle wrote before adding “When things don’t go as planned you must focus on the good that came from it and learn from the bad.

In a completely separate Instagram post, the grandson of country great Waylon Jennings seemingly addressed the unraveling of the tour writing, “What do you do when it feels like life is spinning out of control?? Maybe you expected everything to work out the way you planned.. Maybe you weren’t prepared for things to get rough.. But when that storm hits you’ve got 2 choices.. You can either cut your losses and jump ship.. Or you can get up in that captain’s chair and sail it back home.. I’ve never been afraid of rough seas.. I never gave up just because the future seemed uncertain..”

The news of Trial By Fire Tour’s abrupt shutdown comes on the heels of Kanye West’s meltdown-turned-hospitalization from his own Saint Pablo Tour last week.