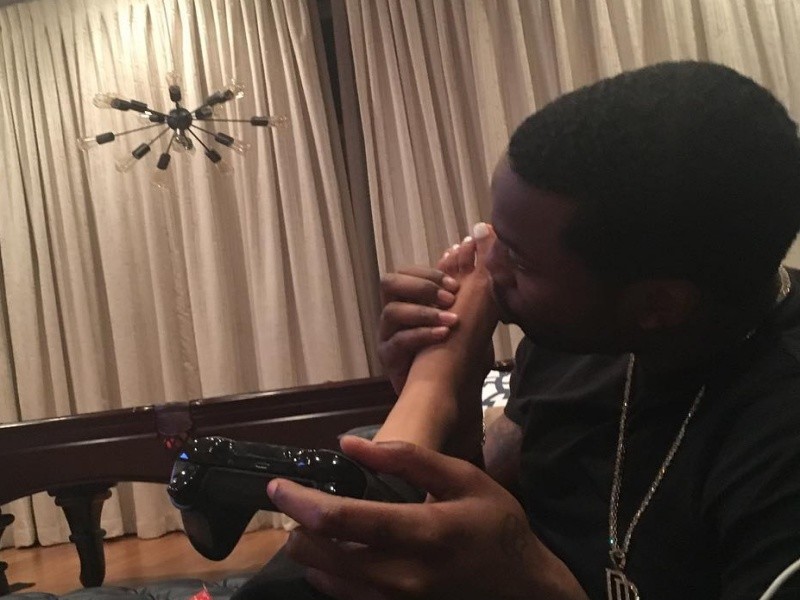 After releasing the successful Dreamchasers 4 and reclaiming most of the rep he lost during his beef with Drake, Meek Mill has decided to give Drake all the ammo he needs for a “Back To Back” sequel.

Nicki Minaj posted a photo of Meek Mill kissing her feet to Instagram on Wednesday night, and predictably enough Twitter was churning out the jokes and memes like nobody’s business.

Meek Mill can't wait to get to the thanksgiving dinner table .. he starting early pic.twitter.com/hKbPUx9eG3

Meek was probably in a intense game of 2K when Nicki just gonna come stick her feet in his face…. Smh

So we just gon act like Meek Mill ain't out here sucking on feet? ?

Meek trippin. I'm not putting my mouth on no feet ?

Meek Milly be kissing feet ? If I kiss/lick a girl feet. Ain no. Breaking up bihh. I'm in it to win it dammit.

Gucci Mane has proposed to Keyshia, Instead of Meek Mill to propose he is busy Sucking feet ???? pic.twitter.com/4GVjfHiBri

Many other Twitter users stood up for the Philly rapper, saying that the people calling him out for kissing his girl’s feet are nothing more than hypocrites.

So Meek kissing Nicki feet is a L ? Lmfaoo get off his dick . Niggas just find anyway to say something bad about that man smh

I'm watchin ppl on IG clown Meek for kissing Nicki's feet while playin Xbox! Lol I swear y'all act like showin your girl some love is bad.

I posted Meek Mill w/ Nicki feet by his mouth & boys want to act like they don't be sucking toes? if he do it, I'm sure some of y'all do too

All we know is that if Drake passes up the opportunity to tell Meek that “This isn’t the first you’ve tasted da feet/defeat” then he takes an automatic L.