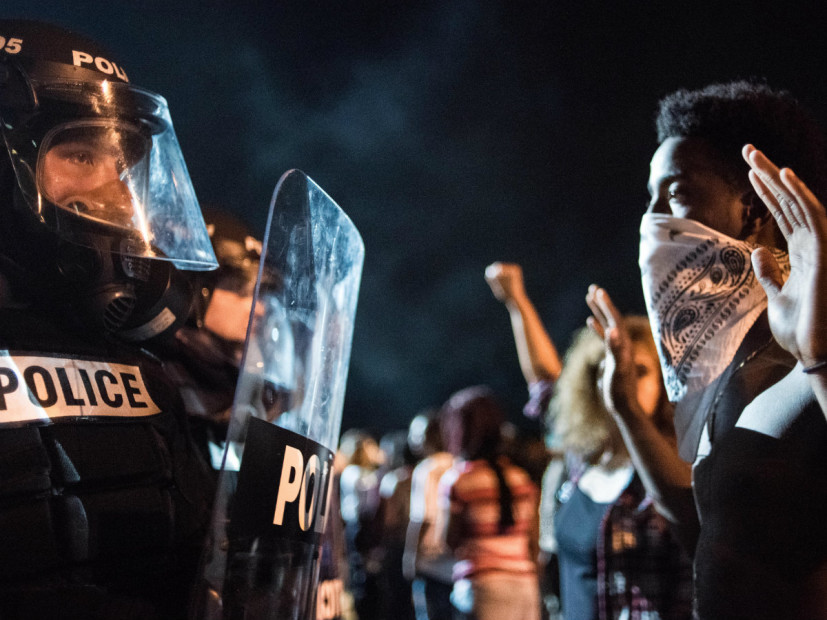 Charlotte, NC – Cell phone footage taken by Rakeyia Scott, the widow of Keith Lamont Scott, has been released and obtained by The New York Times.

It was recorded before and after Scott’s shooting and eventual death on September 20.

Police are saying they warned Keith Lamont Scott to drop a gun multiple times before shooting and killing him, NBC News is reporting.

The 43-year-old black man was sitting in a parked car yesterday (September 20) at an apartment complex near the University of North Carolina at Charlotte when police arrived looking for someone with an outstanding warrant.

According to authorities, Scott got out of his car with a handgun and then got back into his car. He reemerged when officers confronted him. The officers reportedly told him to drop the gun multiple times, but he didn’t listen and one of the policemen shot him. Scott was taken to the hospital where he died.

“The officers gave loud, clear, verbal commands which were also heard by many of the witnesses,” he said, saying the events that led to Scott’s death happened “in a matter of seconds.”

Putney adds that the story being told on social media doesn’t match the facts of the case. He refutes claims that Scott was reading a book when he was confronted by the authorities and says the gun, but no book, was found in the car.

Scott’s family is saying that he was disabled.

BBC also points out that the officer who fired the fatal shot was a black man, Brentley Vinson, a two-year veteran who has been placed on administrative leave.

People took to the streets of Charlotte Tuesday night to protest the shooting. Sixteen police officers were injured and one man was reportedly arrested after authorities tear-gassed the crowd.

Community activist B.J. Murphy, representing the Nation of Islam, called for an economic boycott of Charlotte in the wake of the shooting, according to WGRZ.

This news comes the same week as the shooting death of Terence Crutcher, an unarmed black man who was killed in Tulsa, Oklahoma. This summer, racial tensions were high after multiple black men were shot and killed by police and police were targeted in shootings as well.

View the social media reaction to Keith Scott’s death below.

Keith Lamont Scott. Terence Crutcher. Too many others. This has got to end. -H

Dylan Roof murders 9 ppl in a church, a TERRORIST, treated to Burger King on the way to jail #KeithScott reads book in his car shot on sight

#KeithScott was shot carrying a book. A BOOK
B/c nothing's more treathening to a racist moron w/ a badge than education.
#BlackLivesMatter

They were looking for someone else and killed #KeithScott instead… That's negligence right? They could just say that.

#KeithScott 732nd person to be killed by police in the US in 2016. WHEN WILL WE SAY ENOUGH?

Being #Black and walking down the street free is already bad enough for them. Don't reach in your car, pockets, no talking back. #KeithScott