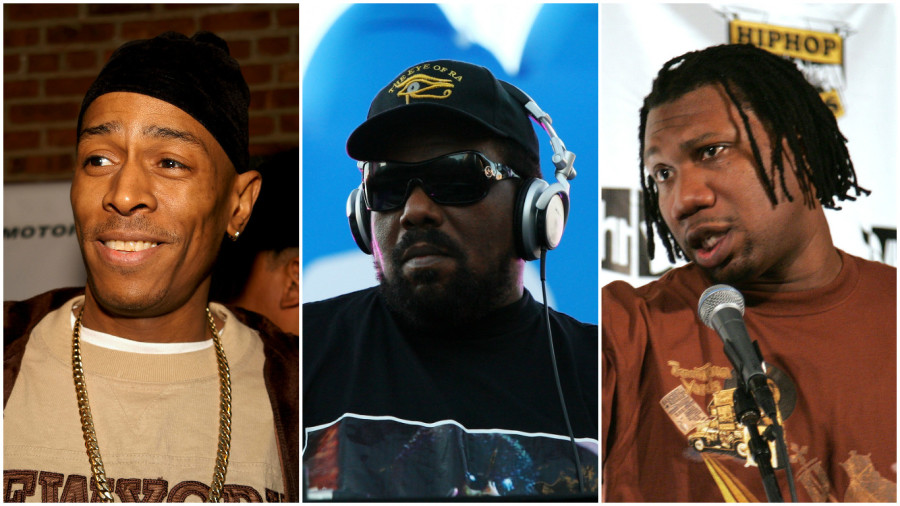 Back when Afrika Bambaataa was first accused of child molestation, few individuals ran to his side, save for KRS-One. The Bronx rapper said that the allegations against the Hip Hop pioneer should not take away from his contributions to the culture. This, according to MC Shan, is because KRS has something to hide.

“I don’t even listen to what that man say no more because I don’t respect that man,” Shan said about Bambaataa during a recent appearance on the Murder Master Music Show. “I don’t care what you did for Hip Hop and when I used to see ‘Bam, he used to embrace me like, ‘Shan, Shan Shan,’ but you can’t even talk to me right now. You can’t say nothing to me. I don’t care what you did for Hip Hop, none of that. And I keep saying, KRS-One you got something to hide, my nigga! Because for you to keep standing up somebody that did what they did and you still standing up for this man, you got something to hide and you don’t want it to come out.”

Elsewhere on the show, Shan applauded the first person to come out against Bambaataa, Hassan Campbell (also known as Poppy).

“Poppy, I respect what you did, brother, I respect what you did,” the rap legend said. “I respect that to the fullest because I been through the same kind of situation. Not a lotta mothers is willing to say because that’s how we are as black men when our pride get in the way. Sometimes people need to know what the hell went on so I respect you, brother. Because I have never told anyone whatever happened to me until your story came out.”

Responding to Shan’s comments defending the Zulu Nation leader, Poppy alleged that members of Bambaataa’s team have paid off some media outlets in return to cease reporting on the allegations.

“Wow, I gotta take my hat off because I seen the interviews that you did and I respect it because a lotta people are pussy footing around with this Bambaataa situation. From what I’m hearing, he’s been paying a lot of the media off to keep off from the story, even some of the people that started with the story.”

In another clip from the show, Poppy opened up about what gave him the courage to come out against Bambaataa even when the Zulu Nation said breaking the news would destroy the nation.

“To be honest with you, a lot of things happened behind the scenes,” he said. “I will give you an example. It’s always been on my mind, it’s never went nowhere but when Afrika Bambaataa got stabbed, the next day we went to his house to see who stabbed him and he gave me a picture of the young man that stabbed him and he looked like me as a young boy, dude was a baby. I knew from there why he stabbed him. Now ‘Bam never told the reason why the boy stabbed him but I put two and two together that’s all I needed. Sometime later they called up to Hot 97 and tried to tell the story and he said that he fell asleep and woke up with ‘Bam giving him oral sex and he stabbed him and he stabbed Ahmed. I have been going to certain brothers that was down with the Zulu and I told him we need to pull ‘Bam to the side to check him on the things that I was hearing about that were still going on. But everybody kept brushing it to the side because they already knew this to be going on with ‘Bam. So eventually, last year when the Million Man March came about, is when it just broke. I let loose and I made the video.”

Later in the show, Rahiem of the Furious 5 called in to also commend Poppy’s courage, as well as join MC Shan in taking a swipe at KRS-One.

“Poppy, before we get into anything, I just wanna say, yo Poppy, I salute you my brother,” he says. “I think you, Ron Savage and all of the other people victimized by Bambaataa’s vagrant sexual behavior were extremely brave and nothing but straight up men in my eyes for coming forward and letting the world know what was happening with Bambaataa.

“That bullshit that KRS was talking about with regards to people need to get out of Hip Hop if they don’t support Bambaataa, first of all, one thing has absolutely nothing to do with the other,” Rahiem continues. “Bambaataa’s contribution to the Hip Hop culture can never be diminished and no one was ever questioned his credibility with regards to Hip Hop, people were questioning his moral integrity. Once you have sexual improprieties with minors your morals should come into question. So whatever KRS-One was saying that wasn’t consistent with how sensitive he should have handled it on the victim’s behalf, I was absolutely taken aback by that. The only conclusion I can possibly derive from all of that KRS said is he must be a homosexual, straight up and maybe Bambaataa touched him, too.”