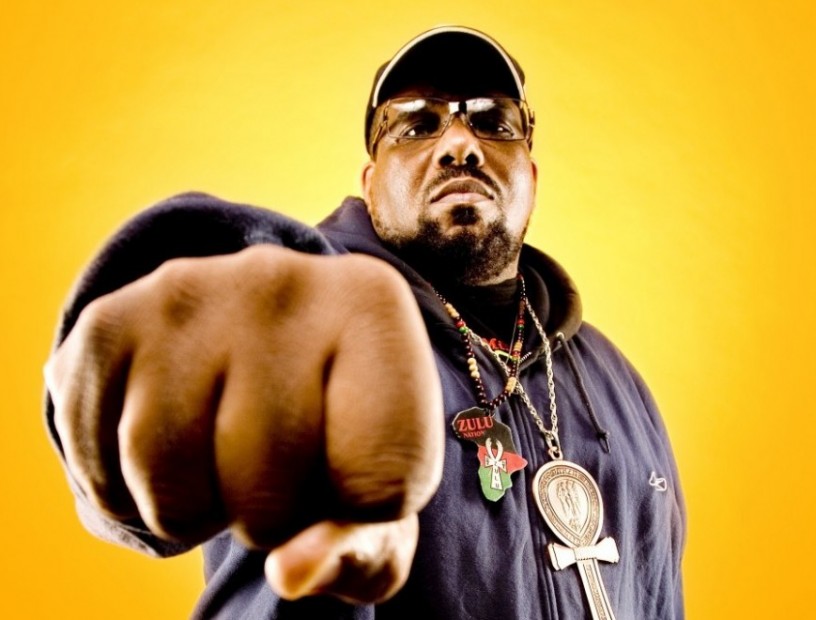 Afrika Bambaataa released a statement to Rolling Stone yesterday (April 12) regarding the molestation allegations leveled against him.

“I, Afrika Bambaataa, want to take this opportunity at the advice of my legal counsel to personally deny any and all allegations of any type of sexual molestation of anyone. These allegations are baseless and are a cowardly attempt to tarnish my reputation and legacy in hip-hop at this time. This negligent attack on my character will not stop me from continuing my battle and standing up against the violence in our communities, the violence in the nation and the violence worldwide.

“In the name of the Supreme Force, who is called by many names, whom All Praise is due. Good Spiritual Human, I pray for all of you and ask in returns your prayers, and let us all do what we must to help change our ways on how we treat each other in evilness, to respect and love for each other as Humans Beings. May Peace and Blessings be upon each and everyone of you. Who would stand up to save us and our planet with so much chaos going on? Peace, Love, Honor and Respect to all.”

The Universal Zulu Nation issued today (April 12) a second statement defending Afrika Bambaataa against the molestation allegations leveled against him.

The statement is as follows, per allhiphop:

The UZN Department of Community Affairs unequivocally views this most recent U.S. government sponsored media attack on both The Universal Zulu Nation in general and it’s co-founder Afrika Bambaataa in particular, as nothing more than a continuation of it’s decades long “HIP HOP COINTELPRO” campaign to discredit and destroy the Universal Zulu Nation.

Indeed, during the past 42 year legacy of the UZN under the leadership of Afrika Bambaataa the UZN was unjustifiably removed from the Bronx River Projects in 1995 by the then Mayor Rudolph Guiliani with his N.Y.P.D. initiated “Operation Commitment” and even today is still unjustifiably labeled and monitored by the N.Y.P.D. as a violent street gang in order to prevent young people from associating with it’s internationally respected non-violent, educational and community uplifting Youth Leadership Department.

Too, there is absolutely no doubt that with the Universal Zulu Nation’s press conference and public criticism of that very same Rudolph Guiliani racist attack on recording artist and actress Beyonce Knowles and her anti-police terror & tribute to the Black Panther Party 50th Anniversary “Formation” Superbowl halftime performance; that Guiliani, the P.B.A. and the N.Y.P.D. also have a hand in this most recent attempt to destroy and demonize the U.Z.N. as being an organization of “cop hating sexual predators”

Additionally, asinine statements to the N.Y. Daily News by the obviously paid agent provocateur and “fired” Hot 97 & Power 95, D.J. Troi “Star” Torain that… “He believes the allegations to be true” are nothing more than an unemployed nobody attempting to emulate the mentally challenged Ronald Savages book selling lies by promoting his own online radio show in order to hopefully return to the sellout/payola Hip Hop radio circuit that he was kicked out of due to pressures from the community and members of the Universal Zulu Nation for both his on air disrespect in the tragic death of recording artist and actress Ailiyah and his own racist anti-asian “sexual predator” remarks to assault the 4 year old daughter of then City Counsel member and current NYC Comptroller John Liu.

We have no doubt that a combination of our ever growing international UZN Chapters throughout Europe, Asia, Africa, Australia, South America, North America and; Our ongoing diplomatic relationships with the anti-imperialist peoples governments of Cuba, Venezuela and Tanzania have all no doubt made us a COINTELPRO target by the U.S. government, mainstream media and the global 1% capitalist powers that be.

In tomorrow’s second installment of this three part response we will expose the fact that D.J. Troi “Star” Torain is a government paid agent provocateur and that his Zulu Nation expert “Poppy aka Baby B.O.” is both a liar and a government paid police informant.

Furthermore, we will show how the N.Y. Daily News and it’s so-called objective reporters in this matter have been compromised and controlled by U.S. government intelligence in order to produce and promote this trial by media assault on the Universal Zulu Nation.

(The most recent story in this thread was published April 8, 2016. It is as follows.)

An attorney for Afrika Bambaataa issued a statement regarding the allegations that the Hip Hop icon sexually molested New York politician Ronald Savage when Savage was a teenager.

“Recently, defamatory statements were published seeking to harm my client’s reputation so as to lower him in the estimation of the community while deterring others from associating or dealing with him,” attorney Vivian K. Tozaki says in a statement to allhiphop. “The statements show a reckless disregard for the truth, were published with knowledge of their falsity, and are being made by a lesser-known person seeking publicity. Valuable cultural resources, such as Afrika Bambaataa’s good name and time, should never be used to assist a mediocre person’s asinine quest for social media popularity and superficial gain.”

(The most recent post in this thread was published April 1, 2016. It is as follows.)

The Universal Zulu Nation has released a statement in defense of its founder, Afrika Bambaataa, after the Hip Hop legend was accused by New York politician Ronald Savage of molesting him as a teenager, according to The Source.

The statement then goes on to detail Bambaataa’s work to bring a positive impact to the youth and calls him a leader and example of the movement’s initiatives to bring change to troubled communities. The document cites the group’s various public service works, including its announcement that it would provide security for Beyonce’s “Formation” tour since police have said they will boycott its protective services from the singer.

“The Universal Zulu Nation which stands as a vanguard and protector of Hip Hop culture sees children as not just off spring but the next generation of solution builders,” the document says. “Afrika Bambaataa has always taught that the children are to be protected and taught the correct sciences of life. He is a living example of himself by his lifelong drug, liquor and crime abstinence.”

The group then decries Savage’s actions. He is called “the poster child for lies and slander.” The Nation questions why he would choose to bring up the allegations in his book, Impulse, Urges and Fantasies, yet claims he tried to repress the memories.

“He has tried to place himself in history by associating himself with Africa Bambaataa (Amen Ra of Hip Hop Culture) founder of the Zulu Nation,” the statement says. “The problem is that he has chose to pursue the lower path of rumors and character assassination.”

The statement demands an apology from Savage. It suggests he has not only harmed the deejay’s reputation, but has attacked the very core values of the Nation.

“By all accounts Mr. Savage please stop lying to the public and openly apologize to Africa Bambaataa/Universal Zulu Nation and all children world wide,” it says. “Not only have you disrespected morally, spiritually and emotionally but now there are serious legal issues that come into play as well. The Universal Zulu Nation works with victims of child and sexual abuse and takes these allegations extremely serious. Many of us are parents and ‘children’ are the most sacred members of any community. Abuse is a real issue in our society and for Mr. Savage to use this as a selling point for a book is parasitic and insensitive to all the true childhood victims of abuse. That is why Mr. Savage owes not only Bambaataa/Zulu Nation an apology but all children who have been victims of abuse.”

Read the entire statement from the Universal Nation defending Afrika Bambaataa below:

Savage gives a detailed account of how the Universal Zulu Nation founder allegedly molested him in an interview with Shot97 host STAR, details which are also included in his book.

He claims the molestation began when he was around 13 or 14-years old and that Bambaataa would often ask him to have oral sex, to which he would always oblige.

“I was a kid when this happened,” the 50-year old author says. “I wanted to be down with the in-crowd, not really understanding that what Bambaataa was doing to me was molesting me. I knew it was wrong. I had these feelings that were like, ‘Yuck.'”

Savage claims that he never reported the molestation incidents out of fear of what the Zulu Nation would do to his family and because he was ashamed.

The statute of limitations for Savage to press charges has expired.

The full interview with  Shot97’s STAR and Ronald Savage accusing Afrika Bambaataa is as follows: