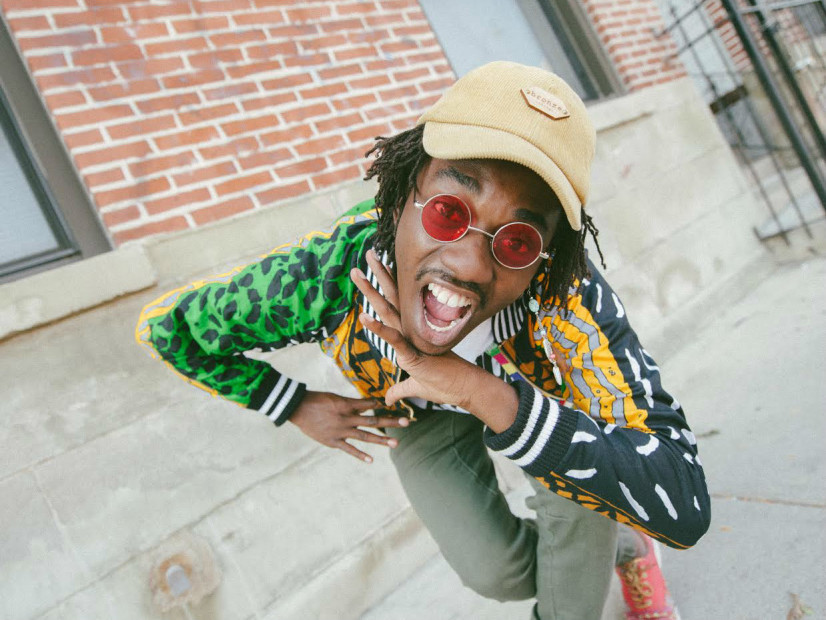 But on his newest EP, Soul Bounce, Wilson has found his own lane. He’s crafted his own sound that blends storytelling, rock influences and yes, bounce. He explains to HipHopDX the inspiration for the title of his latest project.

“Soul was supposed to be a very African-American thing and was like something that was created by the Black people having nothing and making something out of it,” he says. “Then bounce, just that feeling of that real feel-good vibes, almost happy. Usually, you’re bouncing, you’re happy. Happy feel-good vibes.”

The EP is made up of seven tracks including the title track and “We Love Us,” which were released as singles. Wilson said the two songs received mixed response with a lot of love for the more upbeat “Soul Bounce” and says “We Love Us” was overshadowed by news cycles that were going on at the time, including the Olympics. These current events caused him to write the introspective “Powerful” — the last song added to the tracklist.

Hey guys, I'll be on the 91.1 @vocalo radio show talking about the upcoming EP and playing "Soul Bounce" for the first time on the radio ❤️ the show will air on Thursday

But another track familiar to those who have followed Wilson is “Lord Have Mercy.” A break from his rally cries, it’s just a song about admiring a lovely lady. The song first appeared on The Sun Is Out EP, released last year, but Wilson thought it deserved another chance after realizing its potential.

“Someone hit me up and was trying to buy ‘Lord Have Mercy’ off of me, the whole song for like only $1,000,” he says. “That’s when I realized, wow this is a really great song. So I was like, ok someone wants to buy the song. Even if someone wanted to pay more than what they were trying to buy it, but they saw the value in it.”

Wilson explains how, after this experience, being verified on Twitter, and performing at Northcoast Music Festival — his first festival — he is learning to value himself more and more. He’s come a long way from doing shows at small hole-in-the-wall venues where he realizes the support hasn’t grown as his movement has.

“The music isn’t about the money,” he says, “but at the same time, it’s not about the exploitation of me.”

I did my first festival set at Northcoast Music Festival yesterday, Never let anyone tell you what you can't do. Jacket by: @iamsocialite Shoes by: @bucketfeet Shirt: @blkproverbs

In regards to his community activism, Wilson says he’s been able to take a break to focus on his music. After a busy 2015 and a protest against presidential candidate Donald Trump, he feels “there’s been a super big climate shift in the culture.”

He cites the conversations being shared in the local media, such as the Chicago Reader analyzing the role of police in the community, as positive steps forward that he and his friends helped initiate, especially through Black Youth Project 100 and We Charge Genocide, the group that he went to the United Nations with to discuss police brutality. At only 21 years old, Wilson already sees the torch being passed to the next generation.

And Kendrick Lamar has passed the torch to him. On Soul Bounce‘s “Butterfly,” Wilson declares that he has found his own artistry. He uses a line from the good kid’s “Wanna Be Heard” off his self-titled EP where he steps out of Jay Z’s shadow.

“I used to want to rap like Kendrick Lamar until I finally realized Kendrick wasn’t me,” Wilson raps over the vibey beat provided by James Gent.

Wilson says he views the Soul Bounce EP as parallel to Kendrick’s transformation, starting with the Kendrick Lamar EP, from K. Dot into the Grammy Award-winning MC we know him as today.

“This EP is that like moment where I’m actually figuring out, ok this is something real,” Wilson says. “This is who I am. This is my sound. This is what I want to be….It’s that idea of what makes you you and really finding out you can only be you, not be anyone else….so the same point where Kendrick realized he wasn’t Jay Z, I’m realizing I’m not Kendrick Lamar. Even though he’s my favorite rapper, I don’t have to be my favorite rapper. I can still be me and that’s still my favorite rapper.”