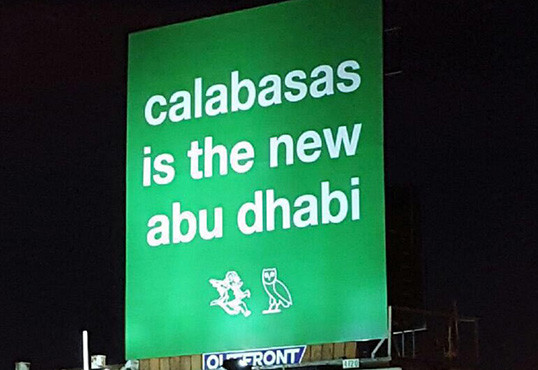 It looks like the collaborative project between Kanye West and Drake is inching its way closer to reality.

A new billboard has appeared in Los Angeles with the words “calabasas is the new abu dhabi” posted above the logos for Drake’s OVO and Kanye’s G.O.O.D. Music, as captured by a user on Reddit’s Hip Hop Heads board.

The photo doesn’t reveal much, but it’s safe to say it’s in Los Angeles because there’s another shot with a street poster for the Los Angeles County Museum of Art visible in it. Drake also recently bought some more ad space in the city to congratulate Rihanna on her MTV Video Vanguard award.

The two commercial superpowers have worked together several times before, but teased a full collaboration at Drake’s hometown show in Toronto during OVO Fest, where Kanye appeared as a surprise guest.

Drake further clarified, saying “What my brother was asking before was, are you ready if we make an album? That’s what he was asking.”

Maybe we’ll hear more about it during Kanye’s four minutes of freedom at Sunday’s VMAs or when Kanye visits Toronto again on Tuesday (August 30) for his Saint Pablo tour.