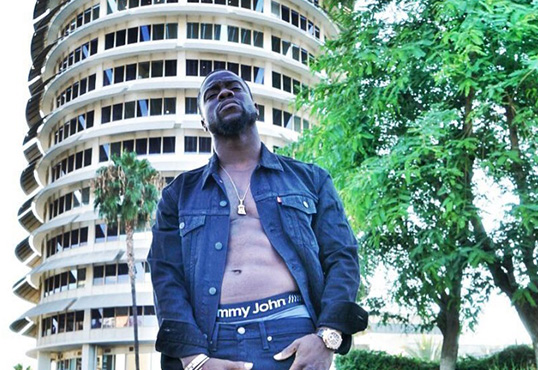 This announcement comes according to Billboard, and Chocolate Droppa himself confirmed the news on his social media account.

The comedian is set to drop an album in the fall through the Capitol Records company and he’s not playing games.

“Coming back to take what’s mine/ Drake, Future, Jay Z, 2 Chainz/ I’m about to smack all y’all on the behind / I let y’all suckas eat, but I’m hungry now,” he raps in front of the Capitol Records building in Hollywood after announcing the deal.

Hart hinted at signing with the label a day before the publication confirmed the news.

“I let all of you sucka’s have fun…..” he says, “well guess what Motha Fu&$a’s….I’m DONE!!!! It’s the RETURN OF DROPPA BITTTCCHHHEEESSS!!!! You’ve been warned!!!!!! I just got signed by “Motown Records / Capitol Music Group” …..Shit just got REAL!!!!! I’m dropping a Mixtape on you bitches….it’s war….y’all can’t run from this lyrical ass whooping!!!!!! #Droppa#TheReturn #WhatNow#hittingtheatersoctober14th #iGotaDeal”

Droppa also made a recent appearance on “The Late Late Show,” where he defeated host James Corben in a rap battle in June.

The actor was chosen to receive a star on the Hollywood Walk of Fame as part of the Class of 2016 along with LL Cool J and Bruno Mars.

If you're a rapper I suggest you run because I'm about to come for all of you sucka's….Y'all just knocked on the door of a small giant that loves chicken nuggets and long walks in the park in the summer….which basically means that I will kill everybody!!!! Real Rap Raw mothafucka'sssss…….Who wants war???? Raise yo hand Bitches….that's what I though….Droppa Motha Fucka's!!!!!!! #WhatNow #hittingtheatersoctober14th #Droppa #TheBestToEverDoIt TAG YO FAVORITE PUNK ASS RAPPER AND TELL HIM THAT HE OR SHE HAS BEEN WARNED!!!!! GAME OVER MOTHA FUCKA's

I let all of you sucka's have fun…..well guess what Motha Fu&$a's….I'm DONE!!!! It's the RETURN OF DROPPA BITTTCCHHHEEESSS!!!! You've been warned!!!!!! I just got signed by "Motown Records / Capitol Music Group" …..Shit just got REAL!!!!! I'm dropping a Mixtape on you bitches….it's war….y'all can't run from this lyrical ass whooping!!!!!! #Droppa #TheReturn #WhatNow #hittingtheatersoctober14th #iGotaDeal