Internet Savvy Duo Moosh & Twist Are Inches Away From Stardom 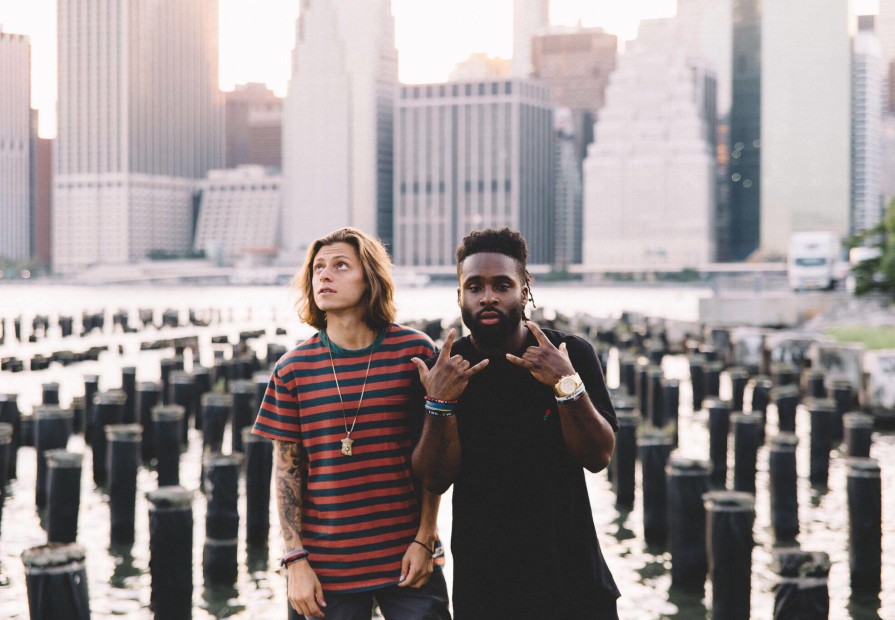 Collaborative projects between established artists have been all the rage for the past several years. But it’s a rarity when duos rise to prominence from scratch. This makes Moosh & Twist’s growth fascinating considering they haven’t been on the mainstream radar. Best friends since before reaching double digits, DeQuincy Coleman-McRae and Oliver Feighan burst onto the scene with their 2011 mixtape Up Before The World and have literally grown into a group destined for a bright future. Millions of YouTube views, music streams in the hundred thousands and a very solid fan base have proven that.

The real show-and-prove moment comes from the recent release of their first outing under EOne Music, Growing Pains. Featuring the Lil Uzi Vert-assisted “Stamina,” and new fan favorite “Woah,” their debut album should solidify them as a duo that isn’t going anywhere anytime soon. Moreover, Growing Pains could be considered a cool example of #friendshipgoals.

Moosh & Twist Explain Building Their Fan Base Primarily Through The Internet

HipHopDX: What’s been the growing pains to get to Growing Pains?

Twist: We been at this point for a while just getting bigger and better, starting to reach more people. We’re super close and we’ve been trying to get there. It’s really been hard for us. We dream bigger than we’re living right now. That’s been a big growing pain and just honestly in the past two years being on the road, dealing with these relationships — we were really honest on this album so we thought it was no better title to call it than Growing Pains for what we’ve been going through.

DX: How did you guys build anticipation for this? You guys have been around for a while. Looking back, you guys did a number in building your fanbase.

Moosh: We just try to stay consistent. To really cater to our loyal fan base putting out music, putting out videos for a few years now. Videos on YouTube, new songs, being interactive on Twitter. Twitter is really good at replying to all the fans and just making them feel involved, which they are. They’re the most important part of the equation so willing to stay in touch with them whether we’re doing Periscope on Twitter whatever we’re talking about on SnapChat; staying involved with them, stay consistent with the music.

DX: Just watched the “Bring Me Some” video. You guys are getting near hundreds of thousands of views without really getting a lot of looks in the mainstream press. How did you even get to the point where you guys could drop all these videos and get all these looks without really being known?

Twist: I guess that’s just the Internet from when we started coming up at 17, 18, 19 or whatever. Our generation is just on the Internet 24/7. It was really just feeding our YouTube channel and our subscribers kept growing and the more that got bigger we put more videos out and got more views. We also just care a lot about the quality of our visuals. I think that helps with it too. People can see we put a lot into the videos even though they know we don’t have a crazy big budget. We always try to accomplish ideas and treatments that don’t require a lot of money that we don’t have to put into the video. I think that’s a part of it. I think it’s also with us that people gravitate towards our energy like how we’re acting in the videos we’re just being ourselves having fun with it. I feel like for us it’s really organic and people can view that when they watch it.

DX: From the videos to your cover. What’s the inspiration for the creative direction?

Moosh: Everything that’s in our journey and what we’ve been through. Especially with this project that is super just us forming. What does growing pains look like? We really want for this album this campaign. We’ve been best friends since we were six years old. So we got pictures of that on the cover; we played sports together. I was on the basketball team. Even from now, our different photo shoots, favorite photos from different shows. Even on the album cover we have a picture of my twins in here as well. It’s incorporating what’s been going on. Everything in our journey. For us we can sum it up and we can’t sum it up in one photo so we made a collage because that’s what growing pains looks like for us.

DX: You got the “Stamina” track with Lil Uzi Vert. How did that come together?

Moosh: Lil Uzi is from Philly so we have some mutual friends. His homie reached out to us like ‘yo I’m going to be in the studio with Uzi the next week in Atlanta,’ just a little while ago maybe eight-to-nine months ago. We just had recorded “Stamina” a couple days before that. We put an extra verse on it, sent it over, didn’t know what’s going to happen. We only met Uzi a couple times before that. He was poppin off. A couple weeks later, we get a Facetime call and was like ‘yo listen to the verse’ we got in the studio and cut it. Shit is crazy, people fuck with it and that’s one of my favorite records so it came together just real organic so we were happy with it.

DX: Despite all the gains Lil Uzi made, he gets a lot of hate in Hip Hop. He stills continues to have top single after top single. Have you learned anything from his rise to mainstream in terms of how people view him?

Twist: I see 50/50 love/hate. A lot of people have a hard time embracing new stuff. I think it’s dope because it’s different. Lil Uzi Vert has a style. He raps, he sings. It’s raw. Him handling it, he’s really a rock star — he do what he want. When he puts out songs, it’s not a typical roll out, not a typical campaign. There’s videos of him making songs and making funny faces and that does better than some people’s roll out.

At the end of the day, that’s his way. Today in the music business, you have to get in where you live and find a way to touch people. Not a typical roll out or label management. Doing a little preview in an Uber — people like that shit. It’s new. It’s different. We just like that he’s himself, and it’s working. He just has to keep doing it. As far as the hate, a lot of people aren’t liking that he doesn’t just spit bars bars bars, that’s not what he’s going to give you. His shit is just fun and a good time; it’s rockstar shit. It’s cool to see him come out of Philly and really put on for the city. It’s a good thing.

DX: How do you guys work together? What’s the workload like when you guys spit a track?

Moosh: We start it off in the beginning when we were younger. It’s different now. Each situation, each time, each verse is different. As soon as he made it somewhere and he might just send me a voice memo and the idea that he had. I may be driving in my car on the highway or whatever I’m doing and I send him a voice memo. When we need to make really important decisions, of course, we’re going to do this together. Even the other day we was at a homeboy’s house in Philly just creating music, just catching vibes just putting beats on. It’s different each situation.

Twist:Back in the day when we would record a song we have both our verses done, one of us would have written the hook and we both go in. Now it’s a little different. We do a lot of writing at the studio, we’ll record stuff. The next day later that night we get some vocals in place and figure out what’s going to be the hook. Who’s going to be first verse. Right now it’s just how we’re feeling and the energy. When we were younger it was like boom, boom, boom alright now let’s do it. Now it’s more about the vibes and the energy.

DX: What did you learn from the process of making the mixtapes to now?

Twist: On this one, we were on Hot 97 yesterday. Honestly, we didn’t really treat it much differently as far as the music and the creative. We give just as much when we do our mixtapes. Now, it’s just bigger production. We go to work with a couple producers and all these different people we probably wouldn’t get to work with. Up into this point, we have a bigger budget. As far as the art and the music. We put just as much in the mixtape as the album. On this one it’s our debut, so we really went back and tried to make this a story, an album, art direction. Interludes and skits, really try to make this the best project ever made. We’re excited for people to listen because we like it. It’s the best music we ever made.

DX: You guys have been friends for hella long time. What keeps you guys together? Why do you think you guys work so well.

Twist: At the end of the day we’re brothers. Nothing can’t get in between anything. One day we’ll be selling out stadiums and giving people the right message. Unity and positivity, that just drives us. We’re not there yet and we will be one day. It’s just like nothing can really, push us off course. Shit gets tough of course, but we have this vision that we’re going to change the world together.

Moosh: We always believed in the beginning even since we were kids everything happens for a reason. Our parents sent us to the same school for a reason, we stayed in contact for a reason. So even now, we got so many taste of what success looks like, it’s a vision. We have a job to do. We going to change the world. Until we get that it’s like the train that stops moving. It’s family. We all love each other.

DX: Why is it so difficult for Hip Hop to have really big groups and duos nowadays?

Twist: I guess since Outkast there hasn’t really been a duo that doesn’t break up in a couple of years. There’s a lot of cliques like A$AP Mob, Pro Era, and TDE. It comes down to the fact that everybody wants to do their own thing or be a squad. As far as with us it works. We have different styles kind of but it works musically. I’m a little more raw and hype. He’s more smooth and I can’t be like that and he can’t be like what I do. So that’s why I think it works out for us because it’s been that way. Maybe it’s going to happen to us, ya know?