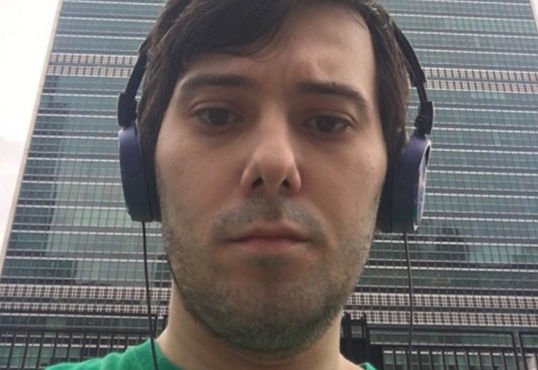 The “most hated man” in America, Martin Shkreli, has announced plans to unleash an album complete with an “inevitable” diss track aimed at none other than Ghostface Killah.

In a series of tweets from Saturday (August 6), the 33-year-old self-proclaimed “serial beat killer” posted the track listing from a supposed project. “My album isnt a pharma parody or no bullshit. It’s anthem after anthem i put down for the streets because I am a serial beat killer,” he wrote.

One of the tracks on the project is being reserved for the demeaning of Ghostface Killah and other rappers, which he appropriately titled, “Ghostbusters.”

No word on when Martin will be releasing this project or his diss toward Ghostface, although he does hint that the summer of 2017 will belong to him once “What Dat Mouf Do” gets a radio push.

As of now, he says he’s considering making his rap alias “M$” with an alter ego that goes by the name of “The Professor.”

Shkreli has been known to troll Hip Hop Twitter before, even recently challenging battle rapper Dizaster to throw down.

But it’s Shkreli and Ghostface that have the most public rivalry.

As the buyer of Wu-Tang’s $2 million, one-of-a-kind album, Once Upon A Time In Shaolin, Ghostface Killah and RZA quickly became two of the Brooklyn, New York native’s stark adversaries after the group publicly distanced themselves from Shkreli once news surfaced of his controversial decision to raise the price of the AIDS medication, Daraprim from $13.50 per pill to $750 each.

Ghost called him a “shithead” on TMZ for raising the price of the drug, causing Shkreli to respond with a video of himself surrounded by goons and a threat to remove Ghostface from Shaolin.

“I did him a fucking favor and I expected him to go out there and say, ‘Well, Mr. Shkreli, he’s not such a bad guy,” the pharmaceutical boss previously shared with HipHopDX’s Editor-In-Chief, Justin Hunte, in an exclusive interview last year. “He’s being misunderstood’ as opposed to, ‘We didn’t know this before his business practices came to light.’ What the fuck does that mean? Fucking defend me. I didn’t pay you $2 million to talk shit about me.”

In that same interview, he also unveiled plans of inserting himself into the rap game, because like many rappers he has “suitcases filled with money” too, and now here he is with a supposed 11 tracks ready for launch.

More recently, Ghostface again commented on the rivalry to HipHopDX.

“Fuck Shkreli. You know where I stand with ‘em,” he said in June. “I would never see Skreli. Some people want they fifteen minutes of fame, and sometimes you got to ignore certain shit. I learned to ignore shit as I got older, or to try to ignore it. I’m a Taurus the Bull so I got a very high temper. I try to swallow my pride and don’t do shit, like I got a lot more to lose than he got to lose. I got family, babies, children. If I really got upside ya head, they gonna arrest me. They not gonna lock you up.”

Check out Martin Shkreli’s tweets about his upcoming project and Ghostface Killah diss track below.

Track listing for the new album. Subject to change. pic.twitter.com/Jor0rdtt69

ghostbusters is the inevitable ghostface diss but you will see i take shots at many rappers https://t.co/n3TJqzQSil

one of the untitled tracks is going to be 'the professor' where i show my surgical, and at times, academic flow

My album isnt a pharma parody or no bullshit. It's anthem after anthem i put down for the streets because I am a serial beat killer.

i'm thinking M$ with the alter ego The Professor https://t.co/4SGd47GWnZ