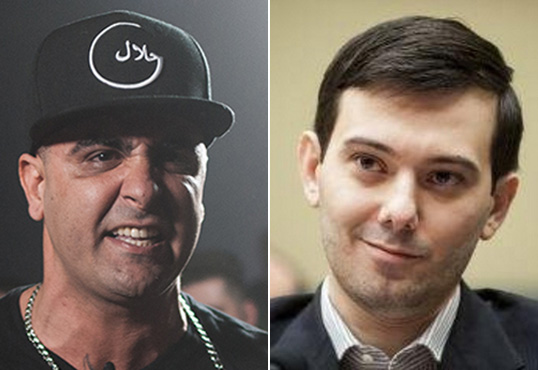 In his recent battle against DNA at King Of The Dot’s “Battles At The Bunker,” Dizaster name-dropped noted pharmaceutical executive/Internet troll/Ghostface nemesis Martin Shkreli.

The West Coast vs. East Coast clash saw the Los Angeles-based battler attack his opponent, who hails from Queens, New York, with this line:

“Ain’t shit y’all can tell me / This is West Coast — home of Snoop Dogg, Tupac, Makaveli / You’re from the fuckin’ home of Donald Trump and Martin Shkreli.”

Once the footage was released, the mention caught the attention of the man himself, who subscribed to the battle league.

That prompted a Twitter shoutout from KOTD staff member King Fly, and then the whole thing got weird.

big shout out to @MartinShkreli for subscribing to @KingOfTheDot battles!!!

Here’s where Dizaster gets involved.

i saw you secure L v. DNA — never holler my name again or you will be dealt with accordingly https://t.co/Ah8H7DG56O

check your fuckin privilege using the N-word. youre not built for war. https://t.co/Jm2UKejXd5

you're fucking with the dude who can set the world on fire with a smile
words? https://t.co/Np5ZYJbeHP

When I mentioned his name vs DNA something told me he would respond lmfao I was right, he really sensitive AF @MartinShkreli ?? my name bro

IM NOT THE FUCKING ONE https://t.co/95IggTaQyG

Dizaster goes from mocking Shkreli to actually proposing the terms of the battle, which include high stakes: the one-of-a-kind Wu-Tang Clan album that Shkreli bought for a reported $2 million.

@MRDIZASTER @MartinShkreli well, I'm here to set it up if Shkreli is bout it!

The don has spoken … Get ur shit together u little dweeb…For once I'd like to see u back up that "HIPHOP" in u?? https://t.co/SaxxCBYEaK

Will Shkreli accept the challenge?

Last year, HipHopDX spoke with Shkreli after he purchased the Wu-Tang album and he said that he would like to try his hand at rap.

“I’ve written some rhymes. They’re alright,” he said. “Teams or not, it still has to come from the [artist]. I think I’m a creative guy. I’ve got a pretty deep knowledge of Hip Hop. I’ve got a good vocabulary, a decent sense of humor and enough material to last a fucking lifetime. I’ve got enough material to write five autobiographies. At 32 years old, I’ve seen and done more shit than just about anyone.”

So maybe he’d have a few bars…

Or maybe he was just trolling.

Twitter isn't real idiot. The Internet is for fun and games, like me on IRC in the 90s https://t.co/PkP3T6mYOI

"The internets are serious business". I love how you idiots think what you say on Twitter can have any impact in real life…. right? ????..