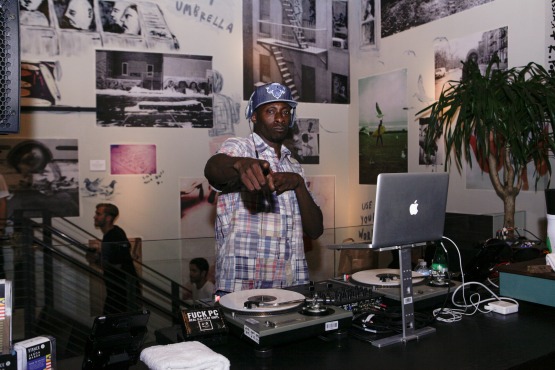 Spinning Hip Hop hits like Common’s “Go,” Slick Rick’s “Children’s Story” and Souls of Mischief’s “’93 ‘til Infinity,” the #1 Soul Brother kept the party – and two beautiful Samba dancers – moving as the two brands celebrated their newly announced partnership in the form of a premium shoe cleaner. The cleaner is 98.3% natural, completely biodegradable and safe to use on all colors and materials, including leather, suede, nubuck, canvas, vinyl, nylon, cotton, mesh and more.

Stance, the San Clemente, California-based brand that reportedly raised $86 million as of last July, became the first official sock of the NBA last April, but isn’t affiliated with the Olympics directly due to Rule 40 – a by-law in the Olympic Charter which states that “No competitor, coach, trainer or official who participates in the Olympic Games may allow his person, name, picture or sports performances to be used for advertising purposes during the Olympic Games.” This ruled out the brand capitalizing on the success of Team USA basketball star and brand sponsor Klay Thompson, a key member of Stance’s Punks and Poets influencer program.

A perfect match for a brand that has thrived in part due to sneaker culture – its socks often paired with everything from basketball shoes to high-end outfits — Los Angeles-based Jason Markk offers an array of shoe cleaning products, from wipes and sprays to brushes and microfiber towels. Jason Markk also aligns with Stance on a streetwear level, offering limited-edition t-shirts and pins commemorating the 10-year anniversary of the producer/rapper’s iconic Donuts project, with portions of the proceeds for each item benefiting The J.Dilla Foundation. The brand’s retail locations, which include Opening Ceremony New York, Kith, Footaction and Reed Space, further solidify their place in streetwear fashion.