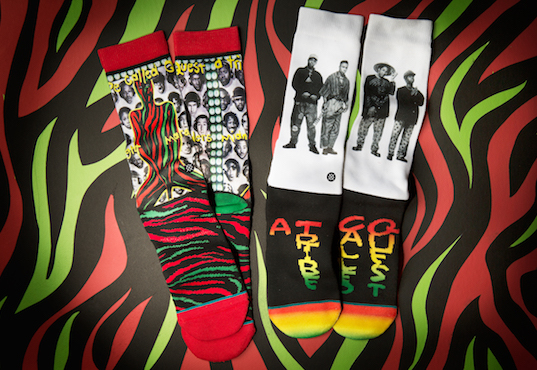 Stance Socks is keeping their Hip Hop movement alive with a couple of new collaborations to bolster their presence on rap fan’s feet this autumn.

The ATCQ sock, strung together on Stance’s Classic Pique fit, features imagery from the group’s 1993 iconic album, Midnight Marauders, as well as profiling all original members – ‎Q-Tip‎, ‎Ali Shaheed Muhammad‎, Jarobi and the dearly departed Phife Dawg — and also sports sublimation print and jacquard design. Hip Hop fans should be delighted to know collectible socks are only retailing for $16.

As for The Answer’s collaboration, the Stance Hoops Punk & Poets’ offshoot picks up right where Big Sean left off and showcases some of the former league MVP’s most memorable aspects of his character (his body art; the Philadelphia 76ers days; his love for “Don P” champagne). A.I.’s socks are currently going anywhere between $10 – $16, and are available in Stance’s Classic Pique, Classic Crew, 200 Needle, and Super Invisible blocks.

Stance’s 2016 Fall Anthem category also introduces the Homecomin’ MLB collection to the fold to complete the trifecta. Fans of major cities such as New York, Pittsburgh, Chicago and Los Angeles will find the appropriate ways to rep their favorite ball club.

Check out photos of the A Tribe Called Quest and Allen Iverson New Fall Anthem Collection down below and head over to www.stance.com to put your orders down.