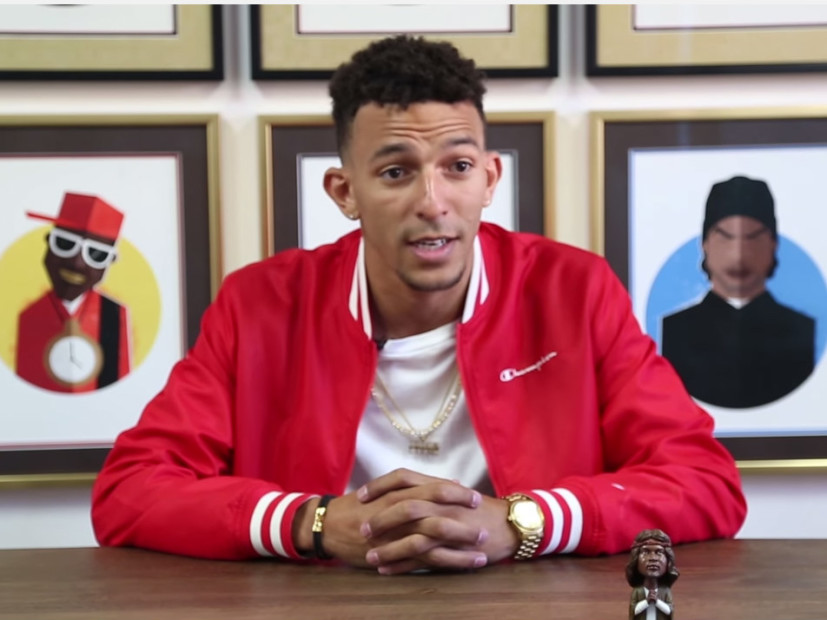 Hollywood,CA – Khleo Thomas has performed with Bow Wow, has his own clothing company and is executive producing his own film. But the world will probably always know him as Zero from the 2003 Disney film Holes. And Thomas is perfectly fine with that.

“I’m the black Harry Potter at this point,” Thomas says in an interview at HipHopDX’s office in Hollywood, California. “That’s how I looked at it for a while. I never felt bad about it or felt like ‘Man nobody will ever see me past this role’ because I’ve always continued to work. I’ve had almost 30 projects after Holes. It doesn’t bother me that it’s still so prominent and dominant. It’s going to continue to be a cultural type of thing, it’s still a required reading book in the schools, and they watch the film after they read the book. No matter what, I’m relevant to every single generation that’s coming next. That’s a win for me regardless. That’s how I see it I never shied away from it and it doesn’t bother me at all to know that Zero is still here. People grew up with that character, and they instantly related to that character. To know that people still hold it dear to their hearts today, let’s me know that I did my job then.”

The 27-year-old is a busy man now with different ventures, but emphasizes that acting is his first priority. His other notable roles include Roll Bounce, Hurricane Season and Walking Tall. He is to star in the independent film, Soy Nero and is executive producing a film that he co-wrote tentatively called Greed.

But he still makes time for his clothing line, Slick Living, and his music. He has an EP called Where Do We Begin coming soon. It is slated to have 10 tracks produced by Chris Batson. Thomas’ last musical project was 2012’s After Everything Fades and he details what he wants to accomplish with his new material.

“For me, it was once again about reestablishing myself in the music industry, music lane,” he says. “Being 27 and doing everything that I have, I accomplished a lot, I can honestly say that with confidence that I accomplished a lot. So We Begin project is telling a story, literally mapping it all out. So where do I begin, where you may know me from, people from 10 years ago or 20 years ago may know me from. It’s a very detailed project every single song has a meaning for the fans to have it.”

The After Everything Fades project was a platform for Thomas to vent his frustrations on the industry. He reflects how he has personally navigated the politics and suggests maybe he should have done a few things differently.

“The entertainment industry is a very interesting place to be and as long as I’ve been here to understand the rules of the game, I’ve played it pretty politically correct,” he says. “I look at that now as maybe something I shouldn’t have been doing, I shouldn’t have played the nice guy all the way through. I shouldn’t have vented a lot of my frustrations because it’s a very cruel world in a sense. It’s a very cruel industry that will almost try and tear you down and the accomplishments that you do have like it’s not enough.”

He shares an example of a situation that is a head-scratcher to him, but also exemplifies his changed attitude towards the nature of the business.

“I had someone come to me the other day and say ‘Did you go to the BET Awards this year?'” he says. “I said, ‘I’ve never been to the BET Awards.’ That shocked the hell out of them. They were like ‘What do you mean you’ve never been?’ I’m like ‘I’ve never been!’ They played four of my films, my demographic is their demographic but I’ve never been invited nor attended or had my request accepted to attend. Very interesting entertainment industry that we deal with. But it’s part of the game. You roll with it. It ain’t helping me or hurting me at this point. It is what it is.”

One aspect of the entertainment industry he enjoys is performing. He gets visibly excited when detailing the scene at a Khleo Thomas show. He has done various shows throughout his career, including opening for Snoop Dogg and Ice Cube on “How The West Was Won.” Thomas toured with Bow Wow on the “Scream Tour” after the two filmed Roll Bounce together and he credits the man now known as Shad Moss for giving him the opportunity to create his own stage presence.

“When it comes to performing, I am a whole different person,” he says. “I am a whole different being. If you could bottle that energy on stage when you know what you’re doing up there, you’d be a billionaire. You’d have the most money in the freaking world because people chase that forever.”

Thomas says that one of the greatest moments in his music career involved his hit song “5 On It.” That song helped him further his social media presence as it went viral on Vine. He says that momentum is what gave him the opportunity to tour in the first place.

“‘5 On It’ was my first record where I actually got to hear the fans sing along to my lyrics and that blew my mind,” he says. “I was like ‘I wrote those lyrics!’ It’s a really dope feeling.”

Thomas believes he has an advantage in the game because of his mastery of social media. He was one of the first celebrities to take full advantage of U-Stream when it came out and boasts 220,000 Instagram followers and has a Twitter audience of 130,000 people, but warns against putting value in numbers.

“I’ve always been on top of the social media game,” he says confidently. “I always knew it was a weapon I could use to help push everything. It bothers me in a sense where that’s the only thing that matters. I feel a lot of things get looked over because that’s the only thing that matters and a lot of times what matters are these numbers. What about the person where you really put them in front of these. Can they actually hold a conversation? Can they actually move something, and a lot of the times they can’t. They’re just drugged the hell out. No knock to the new generation, I’m just speaking facts.”