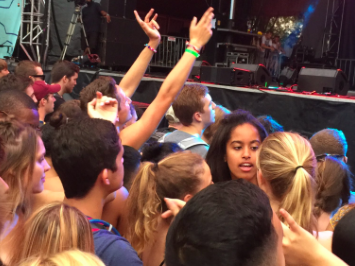 Malia Obama Seen Living It Up At Lollapalooza

Chicago, IL – Instead of attending the Democratic Nation Convention, Malia Obama chose to enjoy the summer at this year’s Lollapalooza festival at Grant Park in Chicago.

The 18-year-old was spotted in the crowd while Norweigan EDM DJ Cashmere Cat performed his set on the Lollapalooza Pepsi Stage Thursday (July 28).

Naturally, the US Secret Service was there to make sure nothing happened to the President of the United States’ oldest daughter while she enjoyed herself, taking in the show with the rest of the concertgoers.

And what exactly does the Secret Service wear to a festival? Plaid button-ups and khaki pants, apparently.

In 2014, Malia was spotted catching Chance the Rapper’s set at the annual festival.

She’s also an avid Hip Hop fan as evident by the Pro Era tee she rocked in a leaked selfie that eventually caused Pro Era-head Joey Bada$$ to think the Secret Service was keeping tabs on him.

“There was a tree outside my door that shaded my whole house,” Joey told the New York Post earlier this month. “It had been there for years. But when that shit with Malia went down, the tree was gone … It’s all good. I’m only doing positive things!”

Khelani, G-Eazy, J. Cole and Towkio are among the many other performers that hit the Lolla stage Thursday. Bryson Tiller, Vic Mensa and Vince Staples are also expected to perform at the four-day festival this weekend.

Check out Malia Obama turning up at Lollapalooza below.

Was going hard to @CASHMERECAT and then Secret Service and Malia Obama just pull up pic.twitter.com/lfNRxWzwRu