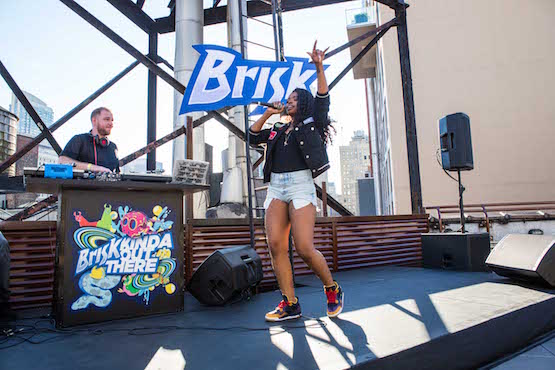 Manhattan, NY – To introduce its new Pineapple Passionfruit Iced Tea, Brisk hosted a rooftop party on Tuesday night that showcased a pair of customized sneakers and a performance by Interscope artist Dreezy.

On a rooftop in Manhattan, about 70 industry insiders enjoyed music, food and drinks for the Brisk “Sneak Out Sneak In” rooftop party. Attendees had cocktails that integrated three flavors of Brisk’s iced tea: Pineapple Passionfruit, Blueberry Lemonade, and Strawberry Melon.

The star of the show was Pineapple Passionfruit, which was the subject of inspiration behind a pair of shoes customized by New York artist Mache. Real name Dan Gamache, his customized shoe designs have been worn by the likes of Kanye West, Wale, and even Kobe Bryant. The Pineapple Passionfruit sneaker uses the Air Jordan IV as its base, and then Mache added a design and colorway inspired by the bottle packaging, with a picture of the mascot stitches into the tongue. One pair was on display at the party, one pair was given to Dreezy, and two final pair will be given away by Brisk through a contest. For shoe collectors who value rarity, the contest will prove to be one for the ages as those four pairs of the sneakers will be the only ones ever to be made.

“Finding the best base shoe to convey the inspiration was the main thing, and getting the vibe behind John Juan, the pineapple [mascot], getting his whole essence,” Mache said. “You never just want to throw a Brisk logo inside of a shoe. You want to make something that people want to wear. … I wanted to go to the wearability, to get the essence of the flavor and the brand, but also say, you know what, that’s a desirable shoe.

“It’s actually really good,” he adds, speaking about the Pineapple Passionfruit iced tea. “I was drinking it while filming.”

Dreezy began her performance around 6:30 p.m., strutting around the stage in the new kicks. She performed songs like “We Gon Ride” and “Spazz,” which are highlights from her new album No Hard Feelings, along with other fan favorites like “Close To You” and “Body.”

“If you’re one of my fans, you know I don’t wear heels. I wear all sneakers, all comfortable shoes,” Dreezy said before the show. “Shout out to Mache, he’s a dope designer. It’s only four pair of these. It’s one upstairs, I’ve got a pair, and they’re giving away two for the sweepstakes. The lines are straight, the colors go with the theme of the Passionfruit, they’re really dope.”