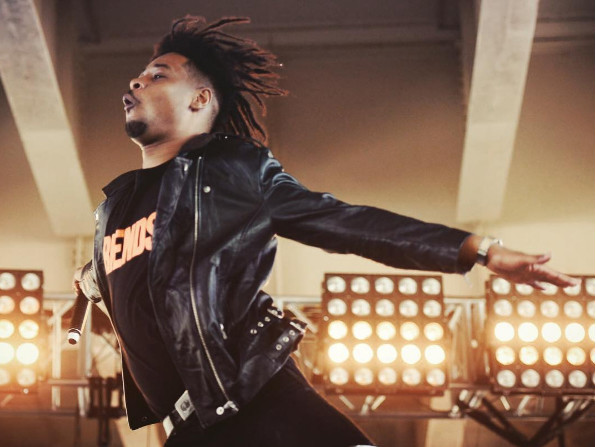 The LP, which is inspired by a song from rock band Joy Division and an experimental collection of stories from J.G. Ballard, is made up of 15 tracks. Kendrick Lamar, Ab-Soul and Earl Sweatshirt appear on “Really Doe.” Other guest appearances come from Petite Noir, Kelela and B-Real.

The Detroit artist says that he released the project early because he “couldn’t wait any longer.”

Brown said he spent $70,000 for samples on this album, so check it out above and see if it was worth it. The Atrocity Exhibition album cover art and tracklist are below.

Danny Brown is readying his next big move as he announces the Atrocity Exhibition album.

The Detroit rapper took to Instagram to share the lines of Joy Division’s “Atrocity Exhibition” song, a cut from the rock band’s 1980 album, Closer. The title of that song comes from J.G. Ballard‘s experimental collection of stories from 1970.

Last month, Brown said that he was putting the finishing touches on what we now know as Atrocity Exhibition with TDE’s in-house engineer, Ali.

Atrocity Exhibition is the title of my next album #Bruisers get ready!!!!!

More recently, he appeared with MF DOOM on “Frankie Sinatra,” the lead-off single from The Avalanches’ Wildflower album.

Brown also announced his own North American tour, which kicks off September 14 in Philadelphia and ends on November 5 in Cleveland. Opening for him are Maxo Kream and Zelooperz. Check below for dates and locations or visit Brown’s site for tickets and more details.

The Exhibition Tour wit Zelooperz and Maxo Kream coming to a city near you!!!! Get your tickets!!!!!