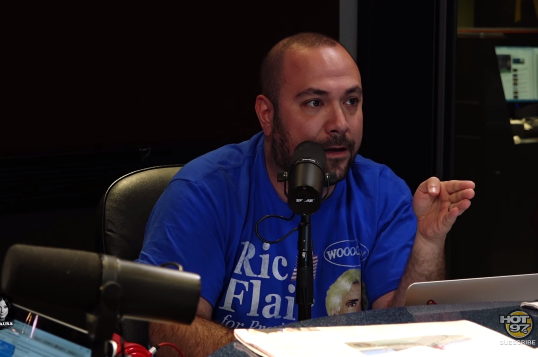 The Alton Sterling police shooting in Lousiana has left the Hip Hop community in a state of shock and frustration is starting to seep through with each passing conversation.

Yesterday in Baton Rouge, the 37-year-old father of three was videotaped being shot to death by police officers as they had him detained on the ground. Sterling was reported to be in possession of a gun as he stood in front of a convenience store selling CDs like he has for years when the officers tased and tackled him before the killing.

Earlier this morning, Hot 97’s morning crew were discussing the situation when a currently employed police officer named “Doug” dialed in but failed to give an objective opinion on whether or not the situation looked “bad,” Peter Rosenberg laid into the “good-ol-boy” system most police officers have been accused of utilizing, despite any amount of guilt that presented itself on or beneath the surface.

“See this is the problem I have with police officers,” Rosenberg began as he made it clear the incoming rant wasn’t necessarily directed at his uniformed caller.

“Y’all don’t ever want ever want to point at someone else and say, ‘You can’t do your job well!!!'”, he continued. I can tell you right now if I heard a radio personality get on the air and do something irresponsible, I go, ‘that’s a bad radio personality. He does a bad job.’ Police officers never wanna say when y’all do a bad job. So that’s the reason the public thinks all of you are bad. Because you won’t ever call someone out and say they MURDERED someone. In cold blood, it happened again. And until you guys start taking responsibility for your own, people in the street are going to be upset instead. So how about y’all lead the movement instead? How about instead of people rioting, police officers get out in front of it of themselves and you guys are the first ones on the front lines!”

Several other members of the Hip Hop community such as The Game and Chuck D have vowed to take action outside of social media. During a family press conference also this morning, the mother of Alton Sterling’s spoke out about injustice as her son wept tremendously as the cameras rolled on. The officers still haven’t been identified (at least formally; check your local social media listings for the scoop, however) and have been placed on paid, administrative leave.

Watch Rosenberg’s passionate response to police cover-ups down below, starting at the 8:00-minute mark.