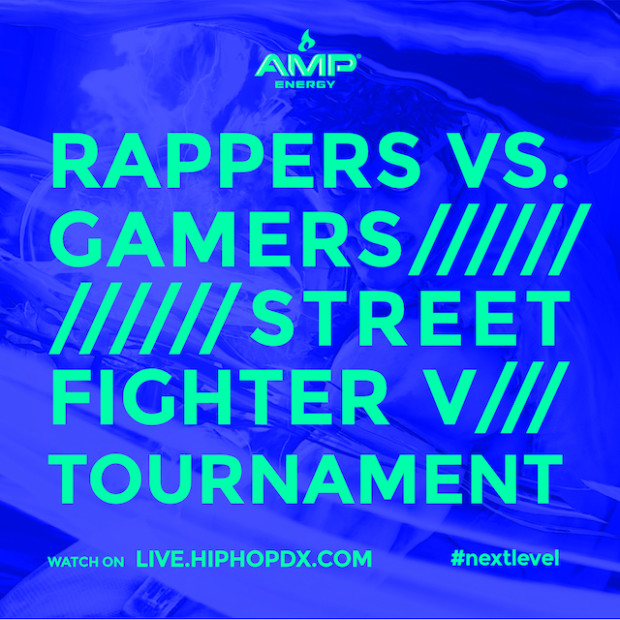 Hollywood, CA – It goes without saying that rappers love their video games. So on that note, HipHopDX, the #1 Hip Hop news source, is proud to announce the #NextLevel Street Fighter V gaming tournament, presented by AMP Energy®. The #NextLevel celebrity Street Fighter V tournament will pit several rappers against each other alongside world renown professional gamers.

Bragging rights won’t be the only prize to be had that afternoon. Capcom has revealed that the grand prize will be a custom painted Birdie/Necalli PS4 console, complete with two arcade sticks and a collector’s edition of the Street Fighter V game, all packaged in a huge Shadaloo crate!

#NextLevel presented by AMP Energy will feature Capcom’s Street Fighter V, as well as some of gaming’s most talented players in the world including Christopher Gonzales, Chris Tatarian, Kenneth Bradley (K-Brad), Brentt Franks, Julio Fuentes, GooTecks and Nicka Tanella with more to be announced. Music will be provided by the legendary DJ Speedy and favored Hip Hop artists like Murs, Problem, Roshon, Trinidad James, and Lil Fizz, along with a host of other well-known influencers will compete for the title of Street Fighter V champion, with more guests to be announced soon.

“HipHopDX is very excited to present such an authentic and original event together with AMP Energy, Twitch and Capcom,” said Sharath Cherian, Founder/CEO of HipHopDX. “We’re honored to have these companies support the gaming and Hip Hop world and having them collide in such a fun way.”

Earlier this year, AMP Energy entered the gaming world through a partnership with Twitch, teaming up to bring gamers a one-of-a-kind program that encourages AMP Energy fans and the Twitch community to ‘level up’ their gaming experience. The program features a national fan and broadcaster sweepstakes, a new website, limited-edition gear and co-branded AMP Energy + Twitch cans, marking the first time the iconic Twitch logo has ever been used on any non-gaming retail product. For more details, visit ampenergy.com/twitch.