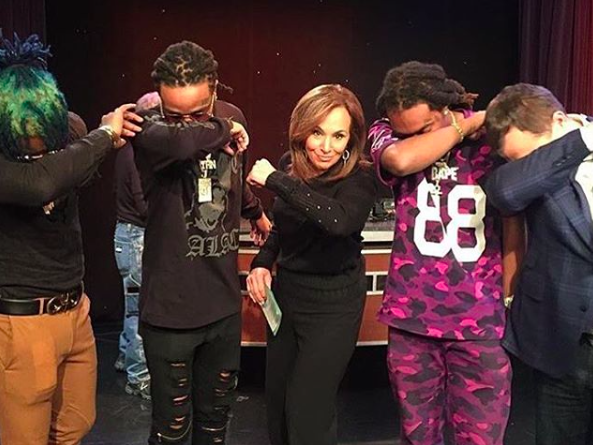 Quavo of Migos: The Dab Is Dead

Migos has officially closed the coffin shut on the dab dance.

TMZ caught up with Quavo at LAX and asked him about Carolina Panthers quarterback Cam Newton, who controversially would hit the dab when he’d make a touchdown, declaring the death of dab.

He actually agrees to say R.I.P. to dabbing along with Cam and ceremoniously performed a last dab for the TMZ cameras.

“You got to give everybody a new trend, a new wave or something new to do so I feel him on that,” Quavo says. “Everybody was copying it and now it’s time to switch lanes.”

When asked if the trio had another trendy dance ready for the masses in the chamber, he passed on revealing if so.

“We ain’t gon’ tell you because we know y’all gon’ take it, bite it and re-write it,” he says. “But you know, we’ll come out with something new.”

Quavo also admitted that Migos would be open to creating a new move with Cam Newton himself.

The dance grew in popularity over the past year with everyone from Texans J.J. Watt, Hillary Clinton, Beyonce, local newscasters and school children performing the dance by simply making a motion as if about to sneeze. It’s usually done to the beat of the song.

Migos are credited as the originators of the Atlanta dance with their 2015 single “Look at My Dab (Bitch Dab).” However, Peewee Longway arguably says he actually started the movement.

Either way, the dance has taken on a life of its own and is now on its deathbed.

Check out Quavo declaring the death of dab with TMZ below.