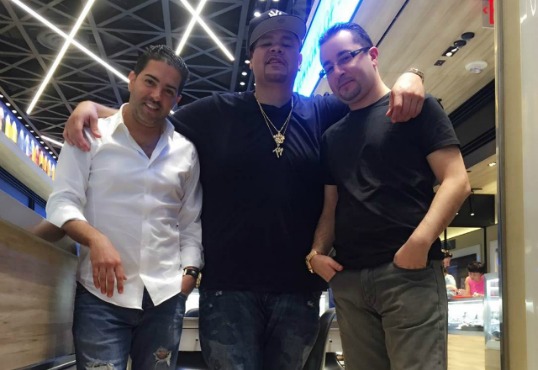 New York, NY – Successful rappers spend a considerable amount of time with their jewelers to the point where they could be considered family in most cases.

That’s exactly the type of relationship Pristine Jewelers and Fat Joe are working with.

The Don Cartagena is currently basking in one of his most visible years since the “Lean Back” days, off his Billboard hit record, “All the Way Up” with Remy Ma, French Montana and even Jay Z on the remix.

To celebrate one of several of his comeback years, his longtime diamond suppliers — Pristine Jewelers a.k.a. Pristine Boyz recently blessed with Joey Crack with a custom Pristine Boyz chain just days after they took care of their longtime friend with a diamond-encrusted Big Pun pendant.

HipHopDX spoked with Avi of the Pristine Boyz, who counts the likes of DJ Khaled, Nicki Minaj and Meek Mill, Floyd Mayweather, Travis Scott and numerous professional athletes as current and past clients. The store rests in the heart of NYC’s Diamond District at 44 W 47th Street and having Joe know the address by heart was a major key to their success.

“I gave Joe this chain because Joe means a lot to me and my career you know when I came and I opened up Pristine Jewelers, I started from the Bronx,” Avi tells DX during a bicoastal phone call from NYC to LA. “I had a store in the Bronx for about 15 years, started from nothing, and made my way to the city. Ever since I came to the city, I’ve grown drastically. Just you know, went basically straight to the top.”

“It’s more of a success story because we all came from nothing, and when I came to the city and I opened up Pristine Jewelers, Joe told me, he was one of the first guys that believed in me and he was like we’re going to take your company to the top. He was a part of that success with me. I just felt like how Jay Z gives everybody in Roc Nation their own pieces and Khaled everybody with the We the Best pieces, Pristine Boyz pieces… basically you know have my own chain, and to just give out to people that have respect on my team?”

Released on May 24, Jay Z’s presence on the official “All the Way Up (Remix)” gave the song a new dose of adrenaline and strengthened the notion that a traditional “New York Hip Hop sound” was on the verge of a resurgence. And apparently Joe isn’t finished. Avi tells us how he “inspired” the Latin remix which will feature two notable artists on the Reggaeton scene.

“He has a remix coming in a Latin version of ‘All the Way Up’ with Daddy Yankee and Nicki Jam so I kind of made that remix happen,” Avi continued, singling out Jam as “one of the hottest Latin artists in the world.”

“It comes of the sense of like we work together, not only from a business aspect; you know we’re just like brothers.”

With business booming, Avi and his team have invested considerable focus onto Royal Elite Vodka, a company that was name dropped in the original “All the Way Up” and Avi is certain it will be “the next big thing.” And Fat Joe also recently came up on a flashy Big Pun pendant that will forever honor his late, great friend.

“The Big Pun chain we made, it basically symbolizes like he said you know I’m the stone, I was independent, so I ended up throwing the Big Pun Jumpman up on the pendant,” he explained.

“That’s what we did. We basically sat down and said that’s what we’re going to do. Create a masterpiece. As for Royal Elite Vodka, That’s another thing that we’re working on Pristine Jewelers are also part of the branding of a liquor company taking it to the top and I’m sure we will. Pristine Jewelers is already growing from a two-year sensation, it’s just rising it’s going up by itself. The business brings great business. Basically doing good you know. My business has never hired a PR firm working for me which I probably should by now. But it’s all about word of mouth, and it’s all about just doing good. It’s really all a word of mouth.”

Cheers to going all the way up — and staying there.