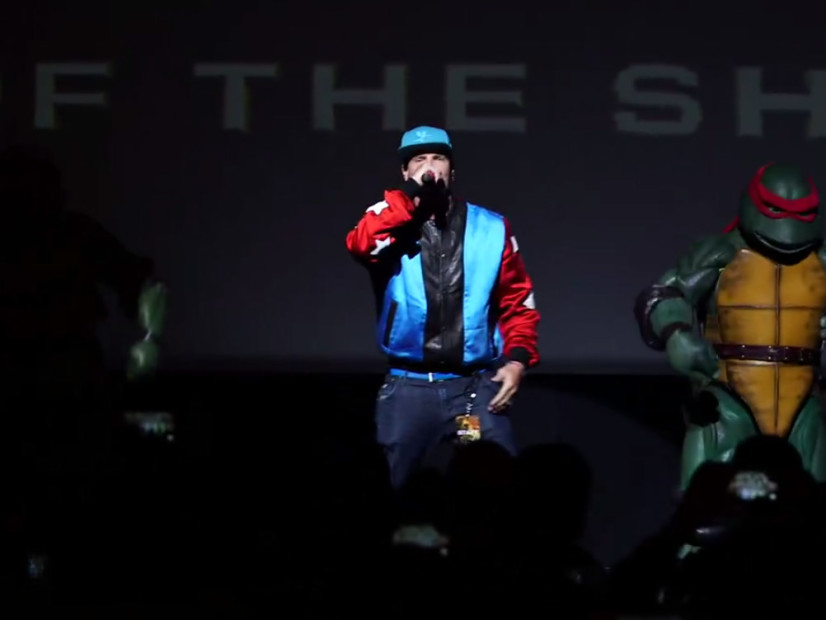 New York, NY – When Teenage Mutant Ninja Turtles II: Secret of the Ooze hit theaters in 1991, Vanilla Ice’s performance of “Ninja Rap” was just as much of a highlight as of the movie as the wisecracking crime fighters.

This week, Vanilla Ice got to relive his glory – and fans of the original film series get a chance to revisit their childhoods.

At a premiere for the new film Teenage Mutant Ninja Turtles: Out of the Shadows at Madison Square Garden, Ice did a surprise performance of the song. Outfitted in a jacket and hat that looked straight from the 90s, he strutted down the aisle past audience members before joining the Turtles on stage.

The song was different from the one in the old film, but all that mattered at Madison Square Garden was the memorable chorus: “Go ninja, go ninja, go!”

“It feels a little artificial,” he said of the song. “What I mean by that is that it sounds like a bunch of executives in the corporate world put it together. It really does not fit the theme of the Ninja Turtles legend. I think you have to understand, and be a true Ninja, to possess the Magic to really pull off the secret sound.”

“Ice Ice Baby” and Vanilla Ice’s appearance in Teenage Mutant Ninja Turtles II were his two biggest moments in pop culture. Between this performance and MC Hammer making his way back into the news lately, it’s feeling like the early 1990s again.

View Vanilla Ice’s performance at the Teenage Mutant Ninja Turtles: Out of the Shadows premiere at Facebook.

Watch the original performance of “Ninja Rap” below: