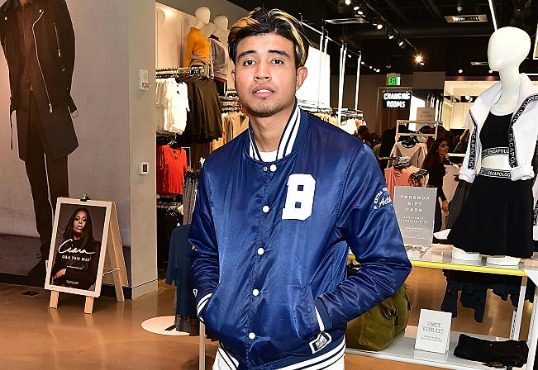 On "El Southside," Kap G Dumbs Down To Level Up

Atlanta, GA – It’s been a long time coming for Atlanta-born Kap G. Still, you’d get the impression that he’s tougher on himself than any fan could be. Within the span of two years, Kap, born George Ramirez, dropped his standout project Like a Mexican, had a breakout role in the instant cult classic, Dope, worked endlessly with Pharrell and hit the road with Chingo Bling and Curren$y—yes, Kap G, a virtual newcomer. But the 21-year-old rapper often finds himself sitting in the same place he began—both figuratively and literally. Not that it’s a bad thing.

For instance, one recent night HipHopDX met up with Kap in his College Park hometown, just down the street from his mother’s house, within a stone’s throw of Hartsfield Jackson International, the busiest hub in the world. Planes soared overhead as we sat, talking lessons, ruts and Trump, and Kap G, the burgeoning rap star with the Hollywood arc, was at peace. A thin veil of fatigue hung over his face but he’d never admit to being tired. Especially when he feels that there’s more work to do. So although he’s fresh off the release of his sixth project since 2014, El Southside, Kap just can’t stop, because he still feels like he’s at the very start.

HipHopDX: What’s the response been to El Southside?

Kap G: The response has been crazy. I don’t know where to start… Most people love the intro [“Move On Up”]. It hits your heart where you can feel it and if you’re Hispanic you’ll understand what my mom is saying on there. She’s talking some real shit. People always hit me up on Instagram like, ‘Yo, what your mom said, that’s what my mom tells me all the time.’ It’s very relatable. Then you got songs like, “Girlfriend” going crazy. Dropped the video for that one two or three weeks ago and it already got 300,000 views. I think that’s gon’ be the one. So yeah, the response has been incredible.

DX: What’s the most important thing you’ve learned since Like a Mexican?

Kap G: Just how to keep going, Never stay the same because with Like a Mexican I saw that I had a big Latino influence but I think for other races and cultures, they may not have understood what I was doing. So for El Southside, I just brought them to my land, where I’m from. Kinda dumbed it down but still, it’s me. I did it so people could get it. Like, people can “get” me now.

DX: By now people ought to know that you aren’t putting on. Yes, this is really how you sound and you grew up in this culture too. Are you over having to explain yourself?

Kap G: It gets tiring sometimes but I guess… People can be judgmental. They look at you and just based off how you look, you know. But it’s whatever to me though, I ain’t trippin’ I’ma just continue to do me.

DX: What’s the best thing Chingo Bling taught you when you were moving around with him a couple years back?

Kap G: I learned how to make my shows better and better. Chingo took me on my first tour two years ago and from there, I was on tour with Curren$y last year so there’s been a lot of growth. I know how to speak to the crowd, I know how the make the crowd do whatever I want. I have control now.

DX: Everyone says they “grind hard” but describe your typical work load. Like, how do you accomplish all this in a couple years?

Kap G: You just gotta wanna work. I had like, 9-12 shows over four days at SXSW. We was out there just working. We do that all the time though. Even last night, I had two shows I was at Opera and performed then I went to Magic City and performed. The work ethic is crazy and can’t nobody match it.

Kap G: Just staying consistent and doing me. Don’t change or switch up. They love me and everything I do with my music and all I gotta do is keep it 100. Just doing me, whether I’m in the studio with a pop artist or not.

DX: Pharrell produced the title track but Squat Beats appears on one-third of the project. Talk about that relationship.

Kap G: Squat Beats is my bro and what’s crazy is that I met him two, three years ago when I got signed. KP introduced me to him and I had just left the studio at 6 in the morning. I had to wake up at 1pm, so I really didn’t even wanna go to the studio that next day when KP hit me like, ‘We got a session with Squat…’ So I go up there and he played a beat. I kinda just wanted to get it over with so I did a simple song on there. He’s like, “I like this song bro but I’ma be honest with you. I see something in you and I don’t wanna give you what every other producer gives you. I think I got some shit for you. I like your style. Let’s really go in.” From there I saw that he’s not a regular producer, Squat knows what he’s doing. We got back together the next day to work and I was out late. Leaving there was when I got pulled over by the police so that next time we got together was when I did “Fuck La Policia.” From then, we just been going in.

DX: So you two have this genuine chemistry…

Kap G: Seems like every time we get together, it’s something. Like when we did “Girlfriend,” [I was up at the Atlantic studios here—DJ Drama’s] Means Street and I was just going through a lot like ‘Damn man, when my music gon’ be out?’ I was just… I was confused. I ain’t know what I was gon’ do. I knew I had the music but stuff with my label was going on… It was just a lot of problems so Squat was like, ‘Let’s go to my studio bro. We gon’ get another vibe.’ I ain’t even wanna go but I was just like, “Aight.” We hit the studio and I made “Girlfriend.”

DX: You earned a lot of new fans with your turn as Fidel in Dope. What are you planning for next with acting?

Kap G: With acting, I’m practicing but I haven’t tried for another role. That’s something I’m finna start looking at more.

DX: Which new rappers are you rocking with out of Atlanta?

Kap G: I rock with YFN Lucci. We got a song called “Power.” Thug, that’s my bro. Cash Out. Ralo. That’s about it in The A but there are a lot of people out here working though.

DX: What’s the hardest part of being a newer Atlanta artist?

Kap G: I feel like for the newer generation of Atlanta artists, it’s hard for us to get up outta that club appearances thing. We not really selling tickets going on tour, selling out venues and arenas. But that’s what I wanna do. I wanna go on tours, forever. Clubs are cool but I want people to buy tickets. With records, sometimes the records can be bigger than the artist. And that happens to a lot of Atlanta people. If you look at the city, there are so many artists and there’s always somebody new. Every month, somebody new has a record.

DX: With you and your siblings being first-generation Americans, what are your thoughts on Donald Trump?

Kap G: With Trump… Nobody fuck wit’ him. And if you fuck wit’ him I can’t fuck with you. That’s what it is. It’s just very ignorant, the things that he’s saying. None of it is good and anybody Mexican, Spanish, black anybody would be tripping about the things he says. And especially to be the future president for the next generation coming up? It’s not a good look. It’s definitely not a good look.