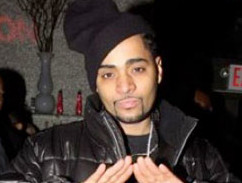 Tru Life, who was released from prison this week after being sentenced to an eight-year prison term stemming from his alleged involvement in the 2009 stabbing death of Christopher Guerrero, has proclaimed his innocence.

“I was sentenced to eight years for something I didn’t do, but that’s another story,” Tru Life says during an interview with New York radio station Power 105.1’s DJ Prostyle. “I got a documentary getting ready to come out about my life. I’m dealing with a lot of different people right now. I’m in the middle of talks with HBO and all kind of different big networks but it’s definitely going to be on a major network. We actually filming right now as I’m talking.”

Despite his forthcoming film project, Tru Life says he has to get used to modern technology and the status of current music after being incarcerated at Clinton Correctional Facility in Dannemora, New York, which is about 325 miles north of New York City.

“When you behind the wall where I was at, it’s like living in the slavery days,” he says. “Everything is wild old school. These dudes got damn near 8tracks in there.

“As far as technology and music, everybody is living in the Stone Age over there,” he adds, “so we really couldn’t really keep up, but I would try as much as I could.”

Tru Life has been released from prison, according to a video posted by ITSBIZKIT.

“Welcome home Tru Life,” the caption for the video, which was posted today (April 26), says.

The former Roc-La-Familia Records artist appears to be in a jovial mood in the clip.

“I thought I wasn’t even gonna get the clothes last night, neither,” he says. “I thought I was gonna come out looking like Jake from State Farm with Khakis on.”

In March 2011, Tru Life was sentenced to an eight-year prison term stemming from his alleged involvement in the 2009 stabbing death of Christopher Guerrero.

Tru Life did not release a project while signed to Jay Z’s company. He landed the deal after generating a buzz through the New York City mixtape circuit.