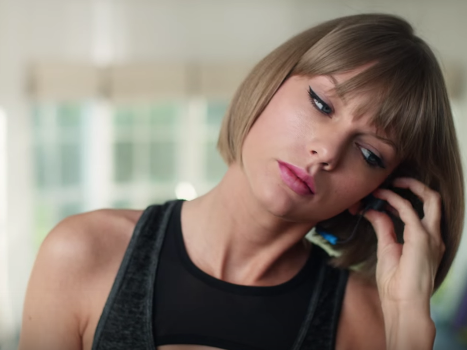 The 60-second ad, which features the singer-songwriter limber up on the treadmill to Drake and Future’s popular single “Jumpman,” was first posted to Swift’s Instagram, quickly followed by her Twitter and Facebook and latterly, Apple Music’s social media channels.

Following the ad’s premiere, iTunes sales for Drake and Future’s “Jumpman” skyrocketed, with Adweek reporting that the song experienced a 431% increase in sales globally thanks to the campaign. It’s also reported that the number of streams for the playlist featured in the ad, #GYMFLOW, has increased by 325%, making it the fifth highest streamed playlist of the week.

“To really get an idea that was simple, informative and funny with hooks is really like writing a song,” Larry Jackson, Apple Music’s head of content, said of the commercial to Adweek. “With an artist that’s got 73 million followers on Instagram, that’s bigger than NBC, CBS and Fox and the viewership of prime time combined.”

Since its premiere, the ad has racked up millions of views across a number of platforms, including over 12 million on Beats 1’s YouTube channel.

“We wanted to capture that feeling that music accompanies every element of your life, and the [Apple Music] service is the backbone of that concept,” said director Anthony Mandler. “When you match that with Taylor’s stance of dancing like nobody’s watching, I think it was a very effortless flow.”

The advertisement, which is now running as a 60-second commercial on ESPN, CBS, NBC, ABC and Fox, will be followed by two additional spots with Swift over the coming weeks.