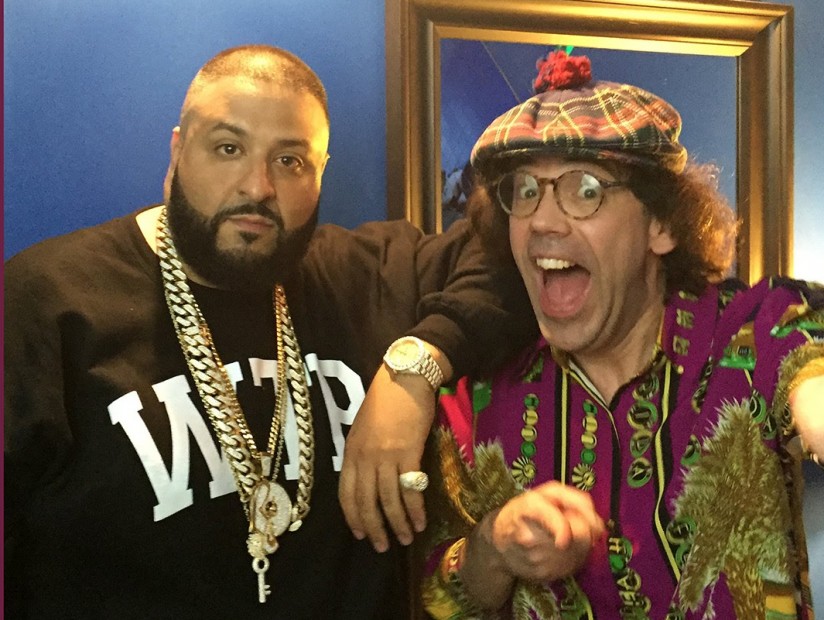 Austin, Texas – DJ Khaled says that coming up in Miami helped make him who he is today while speaking with Nardwuar at SXSW in Austin.

“I used to work at Champs Sports,” DJ Khaled tells Nardwuar in a video. “I used to put the mixtape in the sneakers and they use to come see me because they knew I had them tapes.”

DJ Khaled says he was making his first trip to SXSW because Nas invited him.

“First time in SXSW,” DJ Khaled says. “Nas told me to come this year and I thought I had to make sure to come so I’m here with Nas.”

Nardwuar, in keeping with tradition, handed DJ Khaled many albums that had relevance to Khaled’s past, including a Public Enemy album. A sampling of Miami music was also shown to DJ Khaled including Juice Crew, Clay D, Gigolo Tony, DJ Magic Mike, Missy Mist, Trina and Disco Rick.

He says that strip clubs were essential to the come up of young Miami Hip Hop heads.

“Coco’s legendary, Rollexx those are two legendary strip clubs in Miami if you’ve never been to Coco’s or Rollexx or Take One, you played yourself, you know what I’m saying, that’s the real Miami…”DJ Khaled says. “Tootsie’s like our Las Vegas, if you wanna chill and vibe. Now if you wanna touch another vibe you go to Coco’s, Rollexx, Take one and that’s where I came up meaning as in that’s where I used to hang out, you know breaking my records in the club or passing out flyers for people to go to my parties.”

He says he once tried to get his beats heard by The Notorious B.I.G.

“I used to go to biggie shows with Clark Kent,” DJ Khaled says. “I used to give beats to Clark Kent for him to play for Biggie.”

He says that he is very cognizant of the temperature of his studios while recording.

“If I’m ever recording with Akon, turn the A/C off and turn the heat on, so when he walk in it’s heat, people are sweating,” DJ Khaled says. “It’s the only way you are going to get vocals out of him. You ain’t getting vocals out if you have the A/C on.”

He discusses the time he had to sleep in a car while he was with a girlfriend in Miami in 1994.

“It was rough, but I wouldn’t change nothing,” DJ Khaled says. “It made me who I am. I got to see two parts of life: success and the mud. When I kept growing, I remember two things.”