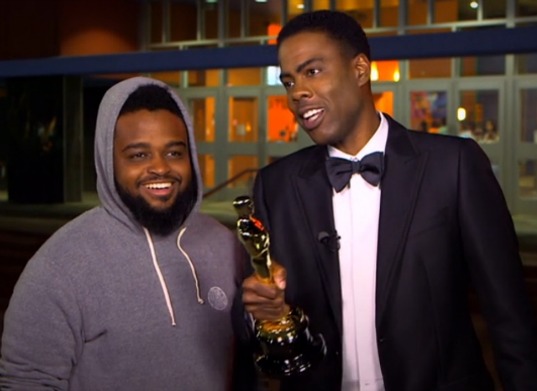 Oscar viewers who expected Chris Rock’s opening monologue to be the extent of his tackling Hollywood’s racial diversity issue were in for a rude awakening as the conversation was scattered all across the three-hour ceremony. This includes the bit where Rock went to the “Compton” movie theater in search of reactions by the neighborhood’s unquestionably black inhabitants.

Last year’s Straight Outta Compton frenzy revealed to the world that the city that birthed N.W.A actually doesn’t have a movie theater, as residents generally make the trip to the cinema still popularly referred to as the AMC Magic Johnson Crenshaw 15. During the skit, keen eyes spotted Calmatic, the West Coast music video director who has supplied the likes of Kendrick Lamar, Jhené Aiko and Overdoz. with standout visuals, among the crowd and HipHopDX decided to reach out to get his take on the entire Oscar “controversy.”

As fate would have it, Calmatic (born Charles Kidd II) and his father were headed to the movies to see the type of film The Academy is being accused of notoriously overlooking when they just happened to stumble onto the ruckus the acclaimed comedian was causing outside.

“My dad hit me like, ‘Yo, let’s go to the movies and see this [Jesse Owens biopic] Race,” he recalled.

“We pull up to the Magic Johnson theater [in Baldwin Hills] and we’re thinking it was a big line outside. I hop out the car to get in what I thought was the line while my dad parked the car and it was really just a crowd of people watching Chris Rock interview random people. I was just watching; I wasn’t really trying to get interviewed but then one of the producer asked would I be interested in getting interviewed.”

It was inevitable that his social media channels and text messages were bombarded with reactions but Calmatic says the most hilarious aspect was there were people who actually thought he won an award, for Rock had participants hold an actual Oscar and give a mock acceptance speech.

Calmatic says his interview was actually fifteen minutes long, that spiraled across a wide range of topics. The bit understandably got cut down but the director recalls producers feeding Rock questions in hopes to get the most sensational answers from people who had no clue about the “white world” of film.

“He then asked me what my favorite movies were, and I told him Forrest Gump and Paid in Full,” Calmatic continued. “We then had an entire back-and-forth convo on how Cam’ron could have been nominated for a Best Supporting Actor Oscar on top of a bunch of random stuff. He was asking me about certain movies like Joy and The Revenant and I wanted to be the one who could say I have seen those films.”

Ironically, HipHopDX just compiled a series of best Hip Hop films from each decade and Paid in Full easily earned its spot during the 2000s period. It goes a long way in showing on how not everyone’s preferences are being represented when it comes to the top level award shows. Calmatic’s director background makes his well-rounded cultural views almost a given, however the Los Angeles bred-artist revealed that being multifaceted will go a long way in his newest endeavor, as he will be making the career shift to movies very shortly.

“I actually just signed with William Morris Agency as a director so I’m trying to make the transition over to film, so I’ve just been focused on writing scripts and figuring out what kind of stories I want to tell and from what perspective,” Calmatic explained. “Hopefully I’ll churn out a few short films this year along with a few other dope projects.” A few of those dope projects will involve more music videos from the The Internet’s underrated latest album, Ego Death and the same multifaceted overview will keep his upcoming films balanced from a racial perspective.

“With my projects, there’s really no conscious [decision] like, ‘We have to get all black people and a few Asians so they can feel included,” Calmatic, who admits the artists and their audiences are “exclusively black.”

“There are so many obstacles when it comes to creating things and satisfying everybody, but for the most part, I just try to keep it as natural as possible,” he says. “Natural means if there’s white people involved, that’s what happens. But mostly I try to represent those who are marginalized in society who are doing great things, such as dark-skinned models.”