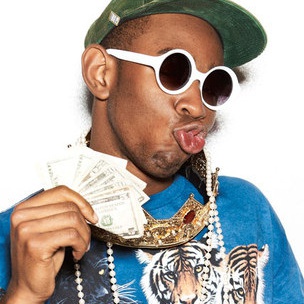 Tyler, The Creator Attempted To Parody A New York Beat On “Yonkers”

Tyler, The Creator says the beat for his “Yonkers” record was actually his attempt “to make a shitty New York beat.”

During a GOLF Radio interview with Vince Staples, Tyler, The Creator shared an unexpected piece of information about his 2011 record, “Yonkers.” As Vince was speaking on artist responsibility and influence, he recalled seeing several clones of Tyler shortly after the release of “Yonkers.”

“There was something that felt that connection,” Vince Staples said, in regards to “Yonkers.”

Tyler then revealed that the beat for “Yonkers” was one he created in an attempt “to make a shitty New York beat.” He says he then found it “kinda cool,” and chose to record “some random verses” over it.

“You don’t realize how much fuckin’ power you have until you go somewhere and see mothafuckas dressed like you or doing things that you do,” Tyler, The Creator said. “And that is nuts…Niggas don’t know that that beat was made as a joke. I was trying to make a shitty New York beat. And we was just rapping like we was from New York…I just had some random verses. And I just actually was like ‘I’ll just record it to this beat. This beat is kinda cool.’ And then niggas really liked it…I made that beat in literally eight minutes.”

Prior to speaking on “Yonkers” and artist influence, Vince touched on the impact art has on culture. At one point in his interview, he stated that “art drives culture forward.”

“Go to the beginning of fuckin’ time,” the rapper said. “Think about Greece or Ancient Egypt. All these things. Art drives culture forward. And for the most part—People where we come from, just in urban situations, and not necessarily black, but just urban in general…The most art you’ll see, unless you go to the museum, which most people don’t, is music and film. That’s what shapes all of us. And that’s what determines who we are at a young age…You’re watching TV. You’re listening to music. That’s what shapes us. We spend the most time with our peers.”

Video of Tyler, The Creator speaking on his “Yonkers” beat, can be found below.