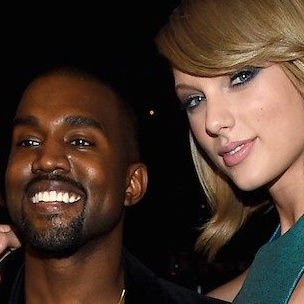 Taylor Swift fired back at Kanye West during her acceptance speech for Album Of The Year at last night’s 58th Annual Grammy Awards ceremony.

“As the first woman to win Album of the Year at the Grammys twice,” Taylor Swift said before continuing, “I want to say to all the young women out there: there are going to be people along the way who will try to undercut your success or take credit for your accomplishments or your fame, but if you just focus on the work and you don’t let those people sidetrack you, someday when you get where you’re going, you’ll look around and you will know that it was you and the people who love you who put you there and that will be the greatest feeling in the world.”

When news first broke about the controversial line last week, Kanye West was quick to jump on the defensive via Twitter. The Chicago rapper-producer claimed that Swift gave her blessings for the line and even alleged that she came up with the lyric herself.

“3rd thing I called Taylor and had a hour long convo with her about the line and she thought it was funny and gave her blessings,” Kanye West wrote in a series of tweets posted last week (February 12). “4th Bitch is an endearing term in hip hop like the word Nigga. 5th thing I’m not even gone take credit for the idea… it’s actually something Taylor came up with …She was having dinner with one of our friends who’s name I will keep out of this and she told him. I can’t be mad at Kanye because he made me famous! #FACTS”

However, shortly after the aforementioned Twitter run, Jon Caramanica of The New York Times shared what was labeled a “Statement From Taylor Swift’s Spokesperson” via Instagram.

The statement read: “Kanye did not call for approval, but to ask Taylor to release his single ‘Famous’ on her Twitter account. She declined and cautioned him about releasing a song with such a strong misogynistic message. Taylor was never made aware of the actual lyrics, ‘I made that bitch famous.’”

As of press time, Kanye West has yet to respond to Taylor Swift’s speech.

Footage of Taylor Swift’s Grammy acceptance speech, whereby she fires back at Kanye West, can be viewed below: