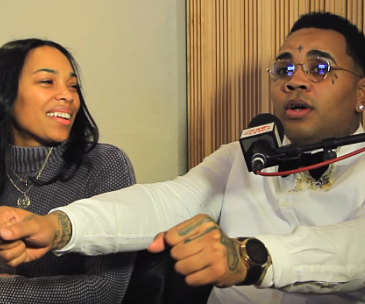 Kevin Gates and his wife Dreka Gates recently appeared on an episode of Angela Yee’s Lip Service to discuss just about everything in their relationship, including their “freakiest” sexual escapade.

First off, though, the couple were asked to reveal what they believe is the best thing to do following an argument.

Dreka later admitted that such a response does work well to quell an argument.

“No it actually does work because you feel good,” she said. “You forget about whatever the hell you were arguing about anyways because it was probably pointless.”

Later in the interview, the conversation became a little more revealing, with Dreka admitting that nothing is off limits in terms of the couple’s sex life.

Wrapping up, Kevin and Dreka detailed the “freakiest” place they’ve had sex.

“Freakiest? The craziest thing we’ve done [is while] driving a car [laughs],” Dreka said, somewhat simultaneously with Kevin. “We were driving in the car and I got and sat on [his] lap while he was driving and we did it [laughs].”

Kevin Gates and Dreka Gates’ interview, whereby they share their “freakiest” sexual escapade, can be viewed below: