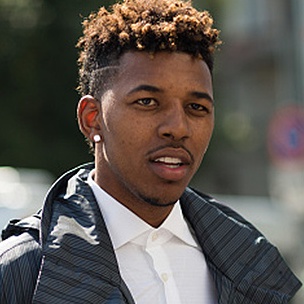 As one of several athletes mentioned on Kanye West’s “Facts,” Nick Young spoke on the moment he first heard the song.

While speaking with Billboard, Young revealed that he had an “I’m the man” moment after hearing his name mentioned by Kanye on the song. On “Facts,” Kanye raps: “Now we hottest in the streets, it ain’t no discussion / James Harden, Swaggy P runnin’ up the budget.”

Young, who goes by the nickname Swaggy P, also shared his thoughts on Michael Jordan’s son, Marcus Jordan laughing at the song in a post made on social media.

“Aw man, I was on my way home, trying to get dressed for my New Year’s event and a couple of my teammates called and texted me [about the song] and I didn’t know what they was talkin’ about,” Nick Young said. “I was like, ‘Y’all playin’, y’all lyin’, man.’ They sent me the SoundCloud [link] and I was like, ‘Aw, it’s over. I’m the man now’… There’s nothing you could really say about the issue. What [Kanye’s] been doing with shoes and clothes, 2015 was Kanye’s year. I understand [Marcus] defending his pops but I think we won this year. Adidas won this year.”

In regards to his fiancée, Iggy Azalea’s upcoming album, Digital Distortion, Young says it will be the best album of the year.

“Aw man, it’s gonna be the best album of 2016,” he said. “I got my Swaggy P feature on it so that’s why it’s gon’ blow up. [Laughs] I see how hard she be in the studio and I heard a couple songs. Couple surprises and a lot of features on there. It’ll be dope.”